You are here: Home / News / News / Bedtime reading as important as ever for UK parents and children

Bedtime reading as important as ever for UK parents and children 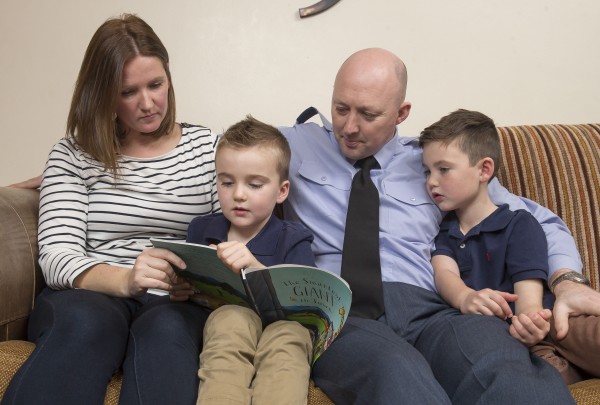 RAF – Swiggsy and his family Emma, Archie and Charlie at his home in Corsham, Wiltshire

70% of parents read to their child at least once a day*, according to new research from the Royal Air Forces Association, the largest UK charity for serving and former RAF personnel.

The Association surveyed members of the public ahead of International Storytelling Day to find out more about the average bedtime in a UK household. Despite technological advances, a surprising 83% of parents and grandparents still prefer to read physical books to their child/grandchild, rather than using devices like a Kindle or iPads.

While stories at bedtime retain enduring popularity, serving RAF parents who currently use Storybook Wings spend an average of 110 nights away from home every year, meaning they often miss the chance to read to their children. Given that the RAF family includes almost 200,000[1] children under the age of 16, the Association launched the Storybook Wings scheme to make sure that children can hear their parent’s voices when separated.

The scheme, which helps serving parents and grandparents record their favourite stories, has been used by 371 serving personnel in the last year making 62,604 bedtimes better. 2,300 families have used it since it was set up in 2009. Storybook Wings recording devices are now available at 32 RAF stations in the UK and personnel are also able to record stories while on active duty, with two recorders in Afghanistan plus others in Cyprus, the Netherlands and at RAF Mount Pleasant in the Falkland Islands.

“Being stationed away from home and the family is always tough but, unfortunately, it comes with the territory. It means the world to me to know that my sons will hear my voice every night before they go to bed and makes me feel like I still have a role to play during the time that we have to spend apart. Storybook Wings has been an invaluable means of maintaining that strong connection with my boys and has really made it seem like almost no time has passed since I was last home.”

“These findings highlight how important storytelling is for parents and their children. We understand the challenges that face parents who are stationed away from home and children shouldn’t have to go for long periods of time without hearing their parents’ or grandparents’ voices. By helping them to record their favourite stories, we hope to bring mum and dad home for an extra special end to the day.

“Wider research2 shows the negative effect of stress and separation from a parent for a child, and the impact that can have on children as they grow into adults. This is particularly prevalent for children of RAF personnel. We are pleased that our scheme helps combat this, and keeps the magic and intimacy of storytelling alive for so many families across the UK.

“The scheme is open to serving parents and grandparents who are stationed away from home, whether that is overseas or within the UK.”

The Royal Air Forces Association conducted an online survey of 184 members of the public in February 2017.

About Storybook Wings
Over 2,300 families have used the RAF Association’s Storybook Wings service since its inception in 2009 and we now record an average around 400 stories per year.

2: Further research: Mike Hughesman, Principal Educational Psychologist for Service Children’s Education with the Ministry of Defence (MoD) 2000-2012: “There can be no doubt that children from service families need to contend with particular challenges that result directly and indirectly from military lifestyle. Service families face a relatively high level of domestic relocation and changes of school; they must cope with having a parent away for extended period, sometimes on operations where there is a risk of serious injury or death; even when the parent does return, the after-effects of a stressful deployment can persist.”

2 Further research: Separation Anxiety Disorder occurs when a child worries about not being with their parent or regular carer and can make settling into nursery or school very difficult. It can be exhausting and frustrating for the parents to deal with, but it is worse for the child who feels such intense fear and discomfort. If parents are unable to get the child to school, the child may develop serious educational, emotional, and social problems. Separation Anxiety Disorder is a predictor for adult problems with anxiety or other psychiatric disorders. (2015, Leslie E. Packer, PhD)

The Association exists in the recognition that RAF personnel and their immediate families dedicate their lives to their country, and to ensure that such a sacrifice does not result in suffering, poverty or loneliness.

Whether it’s an injured airman fighting to get back on his feet, a young child missing their parent away on overseas operations, or a World War II veteran needing a shoulder to lean on, we are here to help all generations of RAF Service personnel and their families.

Our membership of over 65,500 includes serving RAF personnel, veterans and non-service individuals who want to show their support for the work that we do.

[1] Meeting the Needs of the RAF Family.  December 2015.  Research by RAF Benevolent Fund and Compass Partnership.