For the second year running, the global naval and other military communities can enjoy a virtual Admiralty Carol Service on BFBS and Forces channels. 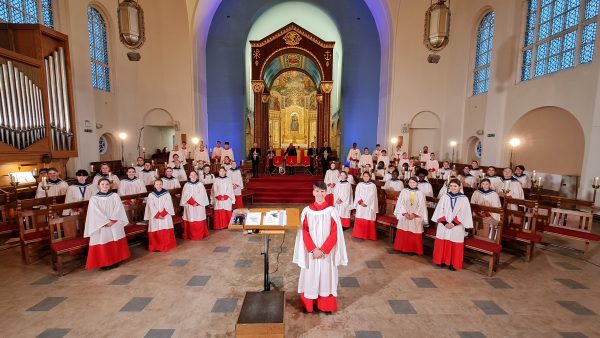 The virtual Admiralty Carol Service is for all those within the Royal Navy community who can’t be there in person at the traditional annual service in St Martin-in-the Fields, in London.

Last year, the annual service didn’t take place due to the Covid pandemic but the virtual service was enjoyed worldwide when filmed and broadcast by BFBS and Forces News.

“Once again, we’ve joined forces with Royal Navy and Royal Marines crews and cadets from around the globe to create this traditional festive treat. It is our aim at BFBS to connect and entertain our UK armed forces in the UK and overseas. And what better way to do this than by bringing some beautiful music and Christmas cheer to the Naval community.”

The carols and music were recorded at the Royal Hospital School in Holbrook, with the Chapel Choir of RHS, and the Brass Quintet from the Band of Her Majesty’s Royal Marines Collingwood, led by Band Corporal Neil Dudley.

Addresses and readings from the newly appointed First Sea Lord and Chief of the Naval Staff, Admiral Sir Ben Key, and the Venerable Andrew Hillier QHC, Chaplain of the Fleet and Archdeacon for the Royal Navy, also form part of the service.

Members of serving Royal Navy personnel have also delivered the readings for the service from St. Ann’s Church at HMNB Portsmouth.

Keep an eye out on our social media channels for tasters of the service, featuring crews and cadets from across the world joining in with popular carols.

When and where to watch and listen to the full service (all UKT):