You are here: Home / News / News / BFBS invites you to a kickabout with Gary Lineker
BFBS, Tickets for troops
Event, Sport, Veterans

BFBS invites you to a kickabout with Gary Lineker

On 24 September military charity and media organisation BFBS, in partnership with Tickets For Troops, invites the UK military and their families to a free online Q&A event with international football legend Gary Lineker OBE. 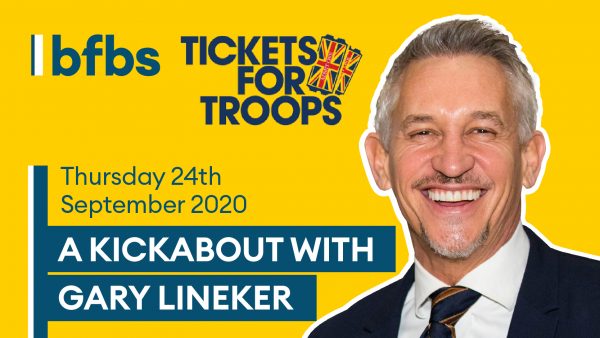 With events being cancelled and restrictions getting tougher, due to the current COVID pandemic, Tickets For Troops and BFBS wanted to ensure that the UK military and their families continue to feel entertained and supported. So, for one hour from 7pm UK time on Thursday 24th September Gary Lineker will be answering questions live from the lucky participants who will join him at the Zoom event: ‘A Kickabout with Gary Lineker’.

Tickets for the event can be secured for FREE via Tickets For Troops – the military charity which provides free tickets to members of the Armed Forces for a variety of sporting, musical and cultural events.

Gary Lineker, who has been a big supporter of the British Military over the years, will be joined by BFBS Radio Presenter Hal Stewart, who will host the event and take questions live from the online audience. Attendees are invited to post questions in the chat room about anything from Gary’s football and broadcasting career, to his current decision to invite a refugee to live with him at his home.

When asked what he is most looking forward to about the event Gary said:

“The questions that I’ll get. Obviously, I don’t know them, and I don’t want to know them beforehand. I’ve been asked all sorts of strange and wonderful things over the years and there’s usually one or two that take the micky a little bit, no doubt…but that’s ok – I might take it back.”

“I’ll give my honest answers to all of them, it should be a lot of fun.”

“At BFBS we’re committed to ensuring that the military community around the world feels entertained and connected – despite the ongoing challenges that make it difficult to do this in person. So, we’re thrilled to have Gary Lineker taking part in this Zoom event. Our military audiences are big football fans, so this promises to be a great evening for them.”

“We’re delighted to have the continued support of Gary Lineker. Gary has been a presence at Tickets For Troops from the very beginning and an invaluable connection to the world of sport and wider civilian community. Raising awareness and spending time with the service community and even starring in our first recruitment campaign to encourage service personnel to join Tickets For Troops.”

Tickets can be obtained via the Tickets For Troops website and directly here:  bit.ly/KickaboutWithGary