You are here: Home / News / News / Blind veteran from Churchill receives prestigious medal for helping liberate France from the Nazis 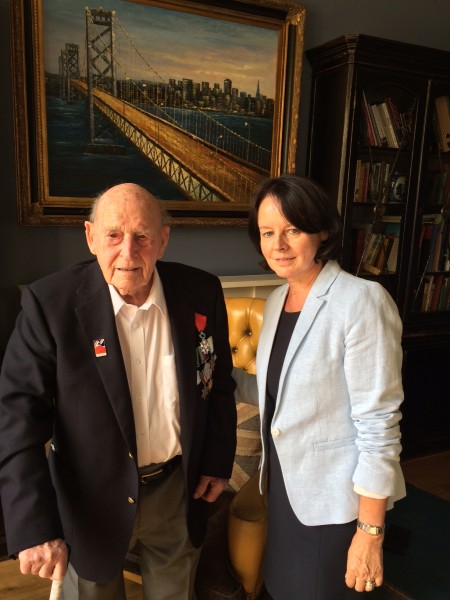 A Second World War blind veteran from Churchill has been formally presented with the Chevalier de l’Ordre National de la Legion d’Honneur for his part in the liberation of France.

Peter Johnson, 91 and from Churchill, was presented with the prestigious honour by Josette Lebrat, the Honorary French Consul of Bristol, on behalf of French president Emmanuel Macron. The special ceremony took place at a reunion lunch in Bristol organised by Blind Veterans UK, the national charity for blind and vision-impaired ex-Service men and women, from whom Peter receives support.

Peter says: “I’m very proud to have been awarded the Legion d’Honneur by the French government. I’m grateful that they have chosen to recognise the part that I and so many others played in the liberation of France in the Second World War. At the same time I’m greatly saddened that so many who died while fighting were unable to be recognised in a similar way. I am therefore receiving this medal not only for myself, but also for them.

“The day itself was a fantastic occasion. Very emotional, but great to meet so many other veterans. It was also lovely to meet Madame Lebrat, as it gave me the chance to try out my French again! I must say, I was slightly rusty at first, but it soon comes back to you!

“The whole process has been hugely enjoyable. I was at the eye clinic the day after the ceremony and seven different people came up to me after I’d been on the TV. One of the nurses even asked if I would could bring the medal in with me next time so that she could take a picture with it!”

Born in Battersea on 22 September 1925, Peter worked for both the Civil Service and the Admiralty before he joined the Royal Navy on 20 December 1943. The first ship he joined was Greek, based in the Aegean Sea, and Peter worked amongst the liaison staff. After five weeks at sea, a Greek mutiny led to Peter’s return to Chatham.

Peter landed on Normandy on D-Day and was there for six days, during which time he worked on escorting the landing craft across to the Arromanches. He says: “I can remember going onto shore a few times, it was mainly to signal to people that it was time for them to come back to the ship and reload their tanks. After that we escorted convoys that were headed east towards Leningrad. It was my only Russian convoy and, if I’m honest, that was enough. Anyone who was there and says they weren’t frightened are not being truthful. We had all sorts surrounding us; submarines, Stuka bombers and E-boats.”

He continues: “I saw lots of ghastly things, truly ghastly. The enemy had a very effective system by which they used to sink the ships in our convoy. I remember seeing ships that had been struck, they’d just break right in half and oil would burst out into the ocean and catch fire. People would jump off into the burning water, calling out the names of their wives and children. We tried to catch as many as we could but it was still the nastiest thing I’ve ever seen, and I witnessed it happen a few times. I had nightmares after that.”

Peter’s Service also included escorting Prince Olaf of Norway back to Oslo, before later being posted to Alexandria on HMS Spencer, where he would again find himself amongst figures of considerable importance. He explains: “Vice-admiral William Tennant, who was the British government representative at the Anglo-Egyptian peace treaty talks, asked me to accompany him to Cairo where I stayed in the Royal Oak hotel – I had my own little apartment complete with a nice sized lounge!”

On his time in Egypt, Peter continues: “I then worked directly for the Vice-admiral, transporting the transcripts of his speeches to Winston Churchill. It was funny, really, in a way I went full circle. I started off in the Admiralty and, by the end, I was sending messages back to them!”

After the war, Peter re-joined the Civil Service for a time before working for British European Airways based in Northolt. Later, he went on to become a tea and rubber planter in the plantations in Kerala, South India, where he built the estate up to include hospital facilities, crèches and even a school. Of his time living in India, he says: “I still miss it, even to this day. The fishing was absolutely amazing. We’d cook the fish in banana leaves and to wash it down we’d just pull fresh coconuts right off the trees.”

Unfortunately for Peter, he suffered a sub retinal haemorrhage in 2004, which was then followed by the detachment of the retina in his left eye in 2005. He recalls: “I remember first going to the doctor and him saying there was nothing he could do, and then a year later, almost to the day, the retina became detached in my other. After that I was completed blind for three months.”

Peter, who has been registered blind since February 2006, first came across Blind Veterans UK after hearing that a friend of his had been receiving support from the charity before his death. He remains grateful for the support offered by the organisation, stating: “They’ve provided me with scanners so that I can read my letters, as well as a stair lift which they donated some money towards. And of course without them bringing it to my attention, I’d have never known I was eligible for the Legion d’Honneur, so I’m immensely grateful for that.”