A blind veteran from Aldershot will run the 60km ‘Ultra’ race as part of this year’s Surrey Hills Challenge on 22 September 2019, with the funds raised going to Blind Veterans UK, the national charity for vision-impaired ex-Service men and women. 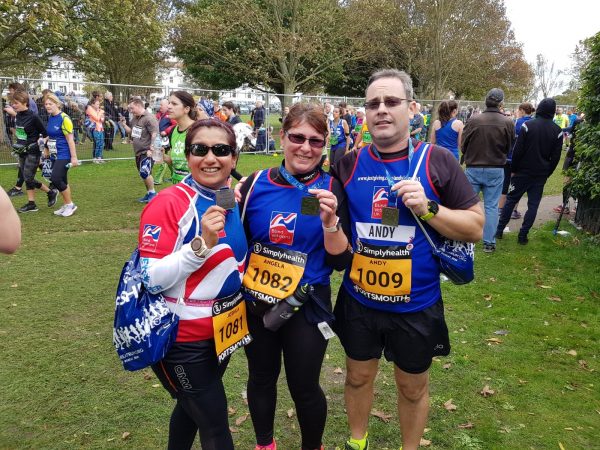 Andy Leitch, 45, will be running with his friend and guide Joey Sharma, 44, also from Aldershot. While this is Andy’s first Ultra marathon, they both have plenty of running experience under their belts. After his discharge from the Army, he met Joey at a Blind Veterans UK event where she encouraged him to get back into running.

In 2017, Andy ran 100 miles every month in a momentous fundraising challenge which saw him clock up 1200 miles over the whole year. Since then, he has gone on to complete the equivalent of 63 marathons.

Andy says: “I used to run with my squadron and regiment when I was in the Army so trail running isn’t a million miles away, but as this is going to be my first Ultra marathon it’s going to be a good test. It’s not just about raising money, it’s about raising awareness and getting people to come forward and say, I was a veteran and I need support.

“Joey is an incredible lady – she’s completed a number of fundraising challenges, including the notoriously tough Marathon des Sables, and has raised a lot for the charity while doing so. She’s confident we’ll get it done within the 12 hour goal. The only thing which worries us a little is the 2000 metre climb at the Devil’s Punchbowl.”

Andy has been receiving support from Blind Veterans UK since 2011, following over 20 years’ service in the Army. After joining the Royal Corps of Transport in 1992 -later the Royal Logistic Corps – Andy became a skid pan and advanced driving instructor with both HGV and PSV licenses, achieving the rank of Corporal.

Unfortunately for Andy, his service was cut just eighteen months short of 22 years when he developed retinitis pigmentosa and started to lose his sight in 2011, something which ultimately led to what Andy describes as a very dark place.

He says: “Thankfully, Alton Adult Social Services told me about Blind Veterans UK and I accepted their invitation to go to the Brighton centre for training. At first, I’ll be honest, I thought it was a hospital, but that soon changed when I met a blind veteran called Martin Shail. Within 24 hours my perception had completed changed and at the end of my four days at the centre my outlook on life was completely different.”

Andy and Joey are hoping to complete an ambitious record-breaking attempt by running from Aldershot to Paris next year, so the Surrey Hills Challenge will form part of their long-term training.

Andy receives much support from a group of family and friends dubbed ‘Andy’s Angels’. He says: “My family do think I’m mad but they are also super proud of what we’ve achieved. The support they give is so important in completing these challenges.

“We have already received generous donations locally from Surrey Hills/Mann’s Removals and donations always give us a morale boost!”

With six different options to choose from, including the 1km family fun run to the 60km Ultra, you can take part in the Surrey Hills Challenge and join Andy and Joey no matter your fitness level. Joey, who has been a supporter of the charity for many years, says:

“I love supporting Blind Veterans UK, what they do is amazing. Doing some of these challenges can be scary but you’ve got to get yourself out of your comfort zone. You can start by doing the shorter distances and get out there, get fit and make so many new friends!”