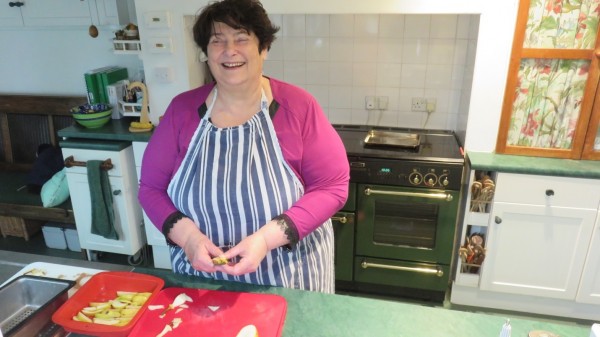 A blind veteran from Hampshire who was invited to compete in the inaugural Holman Prize has emerged victorious as one of the three winners.

Penny Melville-Brown OBE, from Fareham, was selected as one of the 11 finalists from over 200 original entries. Run by the San Francisco Lighthouse organisation, the three winners will be awarded $25,000 to achieve their ambitions. Penny’s goal is to cook across six continents with her online Baking Project, Baking Blind. The two other winners are Ahmet Ustunel and Ojok Simon from the United States and Uganda respectively. Ustunel is planning on completing a solo kayak from Europe to Asia, while Simon is aiming to build a blind-led social enterprise for beekeepers.

She explains: “This all started from a very simple Baking Blind idea I had last year as a way of showing that we can still have great capabilities, ambitions and fun even with blindness or other disabilities. While food is a mainstay across the media and popular culture, it is almost impossible to find any inclusion of vision-impaired people.

“With my Holman Prize project, I hope to be able to change that.”

Penny will be traveling to Costa Rica, Malawi, Australia, China and the United States over the course of a year. She’ll be meeting chefs and teaching blind people and community leaders the techniques and panache of blind baking. She’ll also be filming these encounters to change people’s perception on the capabilities of blind chefs.

She explains: “The adventure will give me enough material to produce a year of videos and blogs, plus a recipe book. Most importantly, it will be a launch pad to change minds about life with an impairment in all those countries and, perhaps, even further afield.

Penny says: “It’s difficult to imagine how he managed without all the technology and equipment that makes life possible with blindness nowadays. But I hope that our shared military backgrounds give me some of his courage and character. His early years in the Navy were spent just a few miles from where I live and there are almost certainly some landmarks he would have recognised in Portsmouth Naval Base where I often worked.

2This year adds another dimension: it is the centenary of the Women’s Royal Naval Service, so I’ve already been sharing Navy memories and Baking Blind ideas through the WRNS 100 Facebook page.”

Penny, who receives support from Blind Veterans UK, the national charity for vision-impaired ex-Service men and women, endured some nail-biting moments during the competition. In the final stages, the finalists’ put forward proposals which were then considered by the Holman committee of 16 exceptional individuals from around the world, all leaders in their fields. 15 of the individuals are blind, with the 16th being Jason Roberts, who wrote the James Holman biography.

Speaking about the Baking Blind website and YouTube video channel, Penny says: “I’m a straightforward home cook so there are lots of short videos of dishes that everyone will recognise – and if I can manage to make them, anyone can.  All the recipes are on the website and downloadable in accessible formats so that others with vision-impairments can use them too. I try to explain how touch, taste, smell and sound work together so that blindness doesn’t get in the way.”

Helping to celebrate the WRNS centenary, Penny has contributed tales of her Service career to a book chronicling the history of women in the Navy: the first woman to come top of the Lieutenants’ Greenwich Course and the first woman naval barrister. After leaving the Royal Navy, she set up Disability Dynamics delivering projects helping other people with disabilities to start their own businesses.  She was awarded an OBE in 2009 for her services to disabled and other disadvantaged people.

For more information on Penny

About LightHouse for the Blind and Visually Impaired

Founded in 1902, San Francisco’s LightHouse for the Blind and Visually Impaired promotes the independence, equality and self-reliance of people who are blind or have low vision. LightHouse offers blindness skills training and relevant services such as access to employment, education, government, information, recreation, transportation and the environment. LightHouse also pursues the development of new technology, encourages