You are here: Home / News / News / Blind veteran from Liverpool receives prestigious medal for helping liberate France from the Nazis 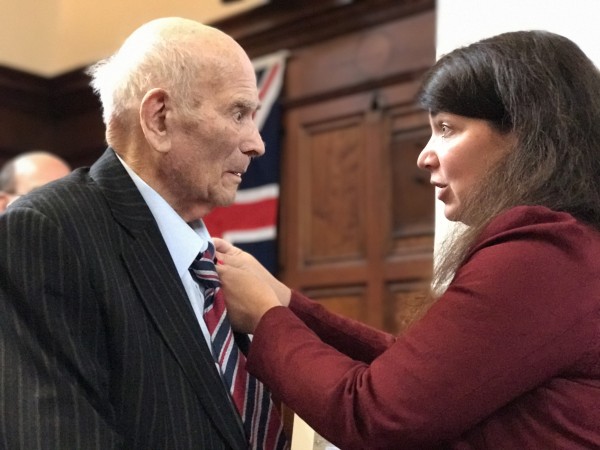 A blind veteran from Liverpool has been formally presented with the Chevalier de l’Ordre National de la Legion d’Honneur for his part in the liberation of France.

Roy Sinton, 92 and from Formby, was presented with the prestigious honour in front of friends and family in Llandudno, North Wales by French Honorary Consul, Mrs Aude Auclair. The ceremony was arranged and organised by Blind Veterans UK, the national charity for blind and vision-impaired ex-Service men and women, from whom Roy receives support.

Roy says: “It was a fantastic occasion and I feel very privileged to have received this fantastic award. I would like to extend my thanks to the French government for recognising the part that I, and so many others – many of whom are sadly no longer with us – played in helping to liberate their great nation.

“Blind Veterans UK is a great organisation and I’m honoured that Mrs Auclair was there to officiate the ceremony.”

Born in February 1925 in Irlam, near Manchester, Roy left school at 14 to work at a small local nursey, earning just eight shillings a week. At the age of 16 he obtained an apprenticeship with Manchester Parks, before enrolling on a three year course in horticulture at The University of Manchester. His studies were interrupted, however, upon the outbreak of the Second World War. 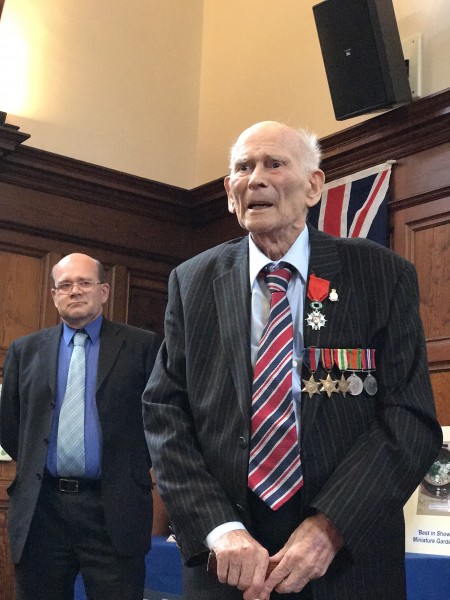 Roy says: “I joined the Royal Navy in 1943. I remember during my interview they asked me what I wanted to do. I told them that I’d like to be a gunner, like my brother, but they said I was too good for that! They told me they had some new anti-submarine detection technology being installed in HMS Stalker, the ship on which I eventually Served. Even the Americans didn’t have it. In fact it was so sensitive we were told not to wear our badges while off-duty for fear of being interrogated.”

Roy continues: “I took part in the landings in the South of France, as well as Rangoon. During D-Day we were in a rest camp in the Atlas Mountains. It was an extremely tough time for my family as my brother was on a ship that came in from Gibraltar. Unfortunately, they told me I wasn’t allowed to see him, or indeed anyone at all. It was very hard indeed.”

“Later I was transferred to the Far East where I was on minesweeping duties. I was in Hiroshima and Nagasaki, just six months after the atomic bombs were dropped.”

Despite the many horrors and atrocities Roy witnessed, he still maintains several positive memories of his time in Service. He explains: “I look back on the war with good and bad feelings. Being in Hiroshima on my 19th birthday, seeing the devastation that had taken place, it’s the kind of thing you’re desperate to forget immediately. It’s one of the most harrowing things you’ll ever see.

“That being said, we had some good times and I met some great mates. But even then, there are times when you don’t think you’re ever going to come home. It’s a surreal thought and impossible to describe.”

After Roy came home from the war, he would return to Manchester Parks where he was offered the position of journeyman gardener. He says: “I was too old to carry on as an apprentice so I had this new role instead. I went between various departments, learning what was required from each one. I enjoyed it but it wasn’t exactly what I wanted. I just wanted to be a hands-on gardener.”

After marrying his childhood sweetheart, Joyce, in 1948, Roy set up his own fuchsia business in 1950. He recalls: “It started off slowly but progressed well. I had a good name for quality, not necessarily quantity. There were so many new gardening centres opening up all over the country, and they were looking for something different.

“For me, it’s always been fuchsias. They’re easy to propagate and this was a big factor for us. There was a huge shortage of different varieties of them suitable for commercial growth, so I decided to capitalise on it. I developed varieties and kept breeding until I got it right. No one else was doing it, it was sheer quality and originality.

Not only did Roy run a successful fuchsias company, during which time he employed up to ten people, but his expertise was also called on by the government. He explains: “The government set up about twelve experimental stations to try and bring the country’s horticulture back to pre-war levels. I was invited to become part of the Advisory committee at Fairfield Experimental Horticulture Station, it was really quite an honour for someone who’d left school at the age of 14!”

Unfortunately for Roy, his eyesight has long been a troubling factor in his life, though he admits it wasn’t until six or seven years ago that it began to severely impact his day to day capabilities. He says: “It all began in earnest around six or seven years ago. I already had age related macular degeneration, so it was gradual, but still very tough. I can’t read anything, but I can see people walking towards me, and from about two or three paces away I can recognise them.”

On how he came to hear of Blind Veterans UK, he explains: “It was my hospital radiologist who initially suggested it to me, and thank goodness they did. We’ve been to the charity’s Llandudno centre and absolutely loved it. The staff were wonderful, they couldn’t do enough for you. I just couldn’t believe there were people like that in the world. I’m proud to be part of the charity.”

Roy says: “The helpfulness of the staff at the charity’s centres is superb. I hope that anyone who’s entitled to their fantastic support is able to make use of it and discover that they do not have to battle blindness alone.”