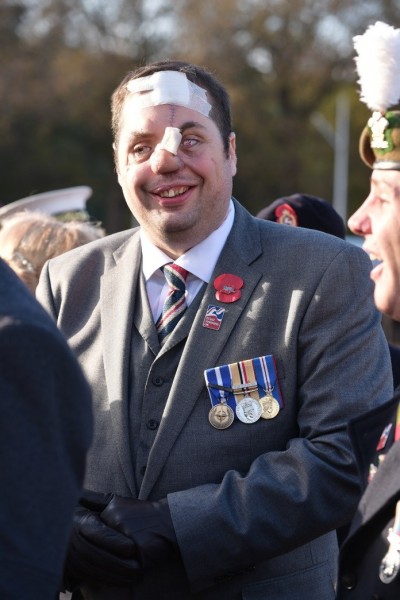 An Iraq War veteran who was blinded in conflict has been shortlisted in the prestigious ‘People’s Choice’ category sponsored by the Sunday Express in the seventh annual Soldiering On Awards.

Simon Brown, 38 and from Leeds, was nominated for the award by national military charity Blind Veterans UK, which has supported him since he lost his sight.

The Soldiering On Awards provide national recognition for the outstanding achievements of those who have served their country and individuals and groups who work together with the Armed Forces community.

The winner of the ‘People’s Choice’ category is determined by the public in an online vote on the Express Online website. Voting is now open and closes on 17 March.

Simon says: “I am truly honoured to have been shortlisted for the People’s Choice Award. After ten years of ups and downs, it is important to reflect on how far I have come. For my peers to nominate me is a huge source of confidence and inspires me to keep going.

“It is a real honour to have my story featured alongside so many other inspiring finalists. We have all overcome incredible challenges and done great work.”

Simon joined the Army in May 1997 as a mechanic in the Royal Electrical and Mechanical Engineers (2 Lancashire). It was just over ten years ago, when he was a Corporal on tour in Iraq, that Simon’s life changed forever.

On 6 December 2006, after Simon had successfully led a mission to rescue six stranded soldiers in Basra, he was shot in the face by a sniper.

The bullet entered Simon’s left cheek and exited through his right, causing severe facial injuries. Simon was given emergency treatment in Basra and put into an induced coma.

Seventeen days later, Simon woke up in a hospital in Birmingham, where he was told that his left eye was destroyed and there was little hope for sight in his right eye.

Simon says: “That was the point when my world fell apart. When I heard the four words ‘You’ve lost your sight,’ it sounded to me like my life was over.”

Fortunately Simon found out about Blind Veterans UK and started to receive free practical support from the charity. This included a rehabilitation programme to help him adjust to sight loss and go on to live independently.

Simon says: “As well as all the invaluable and practical support offered by Blind Veterans UK, it was the sense of belonging and understanding from their community that’s really helped me to stay positive.”

Since his injury, Simon has dedicated himself to working with charitable and voluntary organisations and using his experience to motivate others.

Six years after Simon first started to receive the charity’s free support, he started working in Blind Veterans UK’s Headquarters as a Communications and Engagement Officer, responsible for reaching out to more blind veterans who could benefit from the charity’s support.

In the past year Simon has spoken about his experience with Blind Veterans UK at 72 events ranging from national conferences to local support groups, from Glasgow to Jersey. 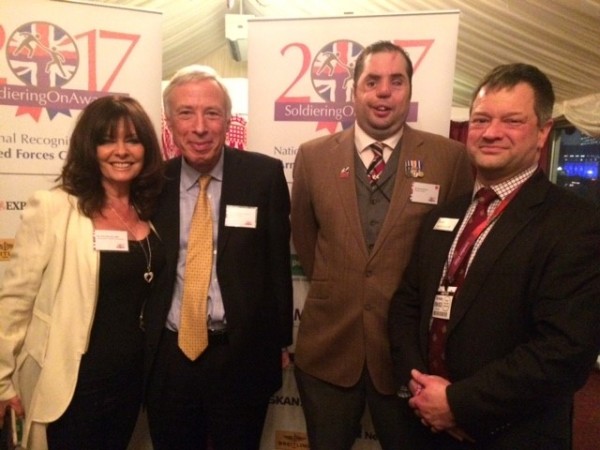 As well as providing vital work for Blind Veterans UK, Simon is a Help For Heroes Band of Brothers Ambassador. Since 2013 Simon has also been involved in a project with Derbyshire Police called Your Choice. As part of this scheme he speaks to GCSE students about the importance of the need to be responsible for their actions.

Simon said: “Iraq changed me just as much mentally as it did physically, and ten years on the scars are still there. Blind Veterans UK helped me through the very worst times and for that I am grateful. Spreading the word about the work of the charity as much as I can is my way of saying thank you for everything they have given me.”

The winner of the ‘People’s Choice’ category will be announced on the evening of the Soldiering On Awards, which will take place on 24 March at the Park Plaza Westminster Bridge Hotel in London.

Please go to www.blindveterans.org.uk/simon for details of how to vote for Simon on the Express Online website. Voting closes on 17 March.

If you, or someone you know, served in the Armed Forces or did National Service and are now battling severe sight loss, find out how Blind Veterans UK could help by calling 0800 389 7979 or visiting noonealone.org.uk.