A local military charity has celebrated 10 years of rebuilding the lives of thousands of blind veterans at their Llandudno base. 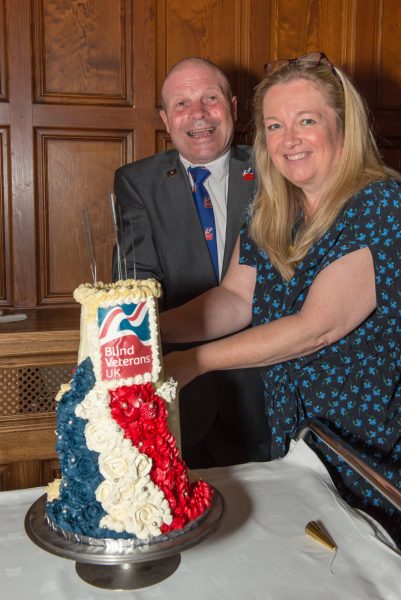 Blind Veterans UK’s training and rehabilitation centre first opened its doors on 19 September 2011 and the charity has been marking the occasion in a number of ways.

A small group of blind veterans were able to join staff and volunteers for a gala dinner with music and entertainment. All of the staff, the majority of whom have been working outside of the building since the beginning of the pandemic, were able to gather for a celebration bbq at the weekend as well.

“It’s been an amazing 10 years supporting blind veterans in North Wales and we’re not finished yet.

“In the time we’ve been here, 4,157 blind veterans have benefited from stays at the centre, with many making multiple visits to receive rehabilitation, training and respite.

“Our veterans now have a whole range of themed weeks to choose from, like gardening and history, to re-engage with hobbies and interests.

“Our outbuildings have also been converted to independent living spaces, where our blind veterans can learn and apply vital skills in a safe setting.”

One of the blind veterans attending the dinner was visiting the centre for the very first time. Geoff Banks, 83 and from Wigan, said:

“My stay here has just been unbelievable, the staff here are so caring and can’t do enough for you. To be there at the same time as the celebrations made it all extra special too.

“They’ve given me all sorts of equipment like a smart phone this week and I can’t praise the whole experience enough. I only wish I could stay longer!”

Three local blind veterans; John, Tom, and John, also attended the dinner and spoke about the friendship they had formed with each other over the last five years that wouldn’t have existed without the Llandudno Centre.

John Nicol, 83 and from Llandudno, said:

“People think it’s strange when I say this but I am being completely honest when I say that I am now actually very grateful that I lost my sight.

“It was obviously hugely hard when it first happened and I thought things were over for me. But now I look back and realise that if it hadn’t been for losing my sight then I would never have got to experience this marvellous place and this marvellous charity.

“Not only have I made some great friends here but I also met my partner. From being quite a miserable guy in a very dark place I’m now the happiest I can imagine. I will always be grateful to Blind Veterans UK for that.”

“I remember when I first started coming here and John N had been volunteering helping support our blind veteran archery sessions.

“He rang me up and I told him it wasn’t for me, but he persuaded me and thank heavens he did. It’s wonderful and it’s more about the friendship than the archery.

“My wife and friends who are outside the charity have all noticed the difference in me since we started coming here.”

John Williams, 91 and from Abergele, said:

“This was the first time I’ve been back to stay since before Covid. It’s been so nice to get back in and see all these old friends and all the lovely staff.

“Throughout the lockdown my Blind Veterans UK Community Support Worker Lisa called to check on me every week and if there was ever anything I needed it, was sorted straight away.

“The atmosphere in this building is magic and we’ve had such a brilliant week. I’ve introduced Tom to crafts this week and he made a love spoon for his wife.”

Blind Veterans UK have made a series of short films to celebrate the 10th anniversary of the Llandudno centre and they, as well as information about how to support the charity in the future, can be found at blindveterans.org.uk/celebrate.