The RAF Benevolent Fund announces its first ever garden at the RHS Chelsea Flower Show. 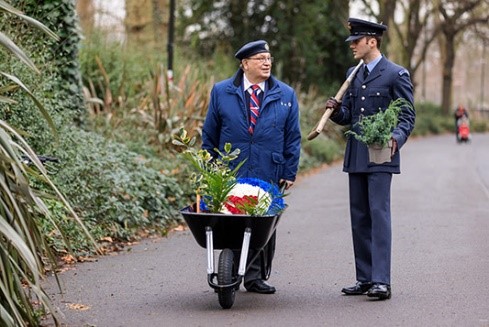 We are very excited to announce that the RAF Benevolent Fund will unveil its first ever garden at the RHS Chelsea Flower Show (24-28 May 2022).

The garden will feature a sculpture of a young pilot looking up at the sky. Standing at four metres tall and constructed from 1,200 layers of laser cut stainless steel, the state-of-the-art sculpture will be imposing and a moving tribute to all those who have served and continue to serve in the RAF.

The garden has been designed to allow visitors to sit and reflect on the service and sacrifice of all the RAF and civilian personnel and we hope will inspire viewers to look into their own history and speak to family and friends about their connections to the RAF.

“This is such an exciting opportunity for the RAF Benevolent Fund and we are incredibly grateful to Project Giving Back and the RHS for making it happen. We’ve had a tough couple of years but we are excited to be able to share our journey with our supporters and the general public. We are delighted to be working with award-winning garden designer John Everiss whose father served in the RAF.”

John’s father Stan, a navigator on Stirling bombers, survived after being shot down over occupied France in 1943. After being hidden by local resistance fighters he was eventually guided over the Pyrenees and eventually reunited with his family after four months.

“I am absolutely thrilled to have the opportunity to work with the RAF Benevolent Fund on our Chelsea Garden 2022. My father was an RAF navigator during WW2, so I have grown up hearing the amazing stories of veterans and their families.

“As a member of the RAF Family, the opportunity to be able to thank them and highlight the fantastic work the charity does is a privilege for me and my team, we really can’t wait to get going!”

Funding for the garden is being provided by Project Giving Back, a new support scheme enabling charities to create a garden at the world-renowned show.

Following Chelsea, the garden will be relocated to a permanent site at London Biggin Hill Airport.

Project Giving Back is the vision of two private individuals who want to offer a significant springboard to a wide range of charitable causes whose work has suffered during the global Covid-19 pandemic. Established and emerging designers, landscapers and nurseries will be teamed with a range of UK charitable organisations to help raise awareness of the diverse and varied way they support people, plants and the planet. In 2022, 2023 and 2024, Project Giving Back will support 14 charitable organisations each year with funding and experienced advice to create a range of gardens at the show.