You are here: Home / News / News / Caerleon fundraiser takes on London Marathon in memory of her father

Caerleon fundraiser takes on London Marathon in memory of her father

A local woman from Caerleon in South Wales is taking on the London Marathon this October to raise money for SSAFA, the Armed Forces charity. 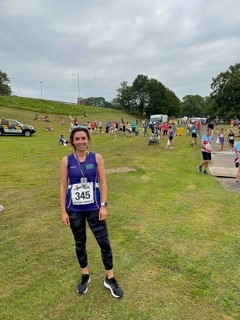 Katie Kenward-Gibbs, 29, from Caerleon, will be running 26.2 miles around the Capital this October to raise funds for SSAFA, the Armed Forces charity.

The Virgin Money London Marathon will take place on Sunday 3 October 2021, beginning near Blackheath in Greenwich and finishing at Buckingham Palace.

Katie decided to raise money for SSAFA after hearing about the support the charity provide to members of the Armed Forces, including her father’s military comrades while he was serving in the Army and RAF.

“I chose to fundraise for SSAFA in memory of my Dad, Laurie, who died aged 56 in 2018 having served over 23 years in Forces. When he died, I received wonderful support, mainly from his Army ‘family’ and many people mentioned SSAFA’s support for the Armed Services, which stuck with me.”

Explaining how she got into running, Katie said:

“I’ve always been sporty since being at Hereford Cathedral School and enjoyed park runs and running alone. When Dad died, running helped, and needing something to focus on I joined Caerleon Running Club. I did a 10km run on my first night and in week two, did a 3 miler with a club-mate training for the Virtual London Marathon, and really enjoyed it.”

“Although not successful in the London Marathon ballot that year, I set my mind to it and now we’re here.”

“Covid’s made fundraising hard but I’ve raised £3511.20 just from friends’ and family donations, with a £500 donation from a Forces friend of my Dad, and my QA employers generously match-funded me for £250”.

“The training’s going really well – I’m so grateful to Caerleon Running Club and people with a wealth of running experience, from 5kms to Ultra-Marathon.”

If you would like to support Katie’s marathon fundraising for SSAFA, the Armed Forces charity, please visit uk.virginmoneygiving.com/KatieKenwardGibbs