You are here: Home / News / News / Cast your votes for ‘inspirational’ fundraising soldier

Votes can be cast for a former soldier left with severe disabilities by a mortar bomb in Iraq, after polls opened in the Soldiering On Awards. 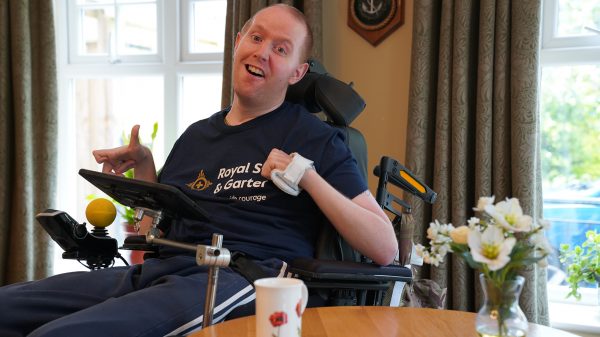 Rifleman Stephen Vause, who lives at Royal Star & Garter in Surbiton, is one of the finalists in the awards’ Inspiration category. Voting runs from 9-22 August.

Stephen was 19 and serving with the 4th Battalion The Rifles on his first tour of Iraq, when a mortar explosion near Basra left him with brain injuries and fighting for his life.

Despite his severe injuries, he undertook a gruelling 60-mile virtual London to Brighton cycle ride from his Royal Star & Garter room during the second lockdown. With the help of staff at the Upper Brighton Road care home, he completed the challenge on his adapted static bike in six weeks, raising more than £5,000 for Help for Heroes.

Royal Star & Garter provides loving, compassionate care to veterans and their partners living with disability or dementia. Stephen has been living at the Surbiton Home since 2015, where he receives round-the-clock specialist care and benefits from one-to-one physiotherapy two to three times a week.

His Help for Heroes fundraising is not the first time Stephen, 34, has demonstrated kindness and generosity. In 2018, when his sister raised money for Royal Star & Garter by taking part in the Tough Mudder challenge, he supported her by undertaking his own challenges, including lifting weights, sit-ups and hand-eye coordination tasks. And during the first lockdown, he introduced the sport of Boccia to the Home, where he worked with staff to help run sessions for other veterans with disabilities.

The awards recognise the outstanding achievements of those who have served their country, and the diverse people and groups who work together in support of the Armed Forces Community.

“If I win this award it will mean a lot to me knowing that the hard work paid off. I’m proud to be shortlisted. Please vote for me.”

His fundraising efforts began on Christmas Eve 2020, and were backed by celebrities including Lord Sugar, the Loose Women team and Jeremy Vine. The final moments of his fundraiser on 1 February were captured on film by Royal Star & Garter staff and shared by Lorraine Kelly on her ITV breakfast show.

Royal Star & Garter works closely with Help for Heroes, who also funded a bespoke wheelchair and specialist gym equipment to support Stephen’s care. Speaking in June after Stephen’s shortlisting, Joy Jones, Head of Community & Events at Help for Heroes said: “It’s fantastic news that Steve’s fundraising efforts have been recognised. He is an absolute inspiration and we can’t thank him enough for supporting us with his epic challenge. He shows us all the incredible things you can achieve when you put your mind to it.”

To vote for Stephen, go to www.starandgarter.org/votestephen.