A short film produced by military charity, Scotty’s Little Soldiers, has gone viral reaching more than 500,000 people across the globe. The film, A Hero’s Legacy, tells the story of Corporal Lee Scott, a loyal soldier, dedicated husband and loving father, and how he has inspired a movement that has gone on to support hundreds of bereaved Forces children and young people. 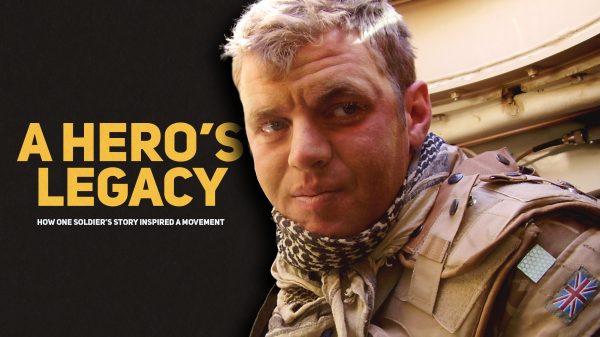 Since launching in May with a Facebook premiere, the film has reached audiences as far afield as New Zealand, Australia, South Africa, Canada, the USA and throughout Europe.

The team at Scotty’s Little Soldiers created the film to highlight the support they provide to children and young people who have experienced the death of a parent who served in the Armed Forces and to share the story of Corporal Lee Scott – the inspiration behind the charity. Lee was killed in Afghanistan in 2009 and after seeing the devastating impact on their two young children, his wife, Nikki, set up Scotty’s Little Soldiers to offer support to other bereaved military children and young people.

The response to A Hero’s Legacy has been incredible, prompting an outpouring of gratitude and support for the work Scotty’s does within the Armed Forces community.

“Amazing! Just amazing! What a raw, truthful video that really captures the essence of what you amazing guys do!! Well done to you all.”

“An amazing mum. I was totally moved by your talk. Your husband would have been so proud of what you have achieved in supporting young children who have lost their parent.”

Julie Matson, who is mum to Scotty member Amelia, whose father, Flight Sergent Robert Matson, died in 2018 when Amelia was 14 years old, said:

“Amelia and myself sat and cried together. It was sad, touching and beautiful all rolled into one. We cannot thank you enough for what you do for us all.”

The film has also strengthened the charity’s existing bonds with the military personnel:

“This charity is truly inspirational. I never knew Lee Scott but his death had a big impact on me, I was the one in Afghanistan who reported his death along with lots of others on the 9/10 July 2009. It is great to see Scotty’s Little Soldiers grow. I have a tear in my eye watching this great video,” said Wayne Palmer.

“I’m completely blown away by the response to A Hero’s Legacy, it’s been incredible to hear the feedback and to know that it has reached so many people all over the world. Lee would be so chuffed to know his story has had such a huge impact.”

Last year, Scotty’s launched Overwatch to provide supporters with a chance to watch over the children our fallen heroes leave behind and help ensure they have a brighter future. By pledging a monthly donation, subscribers get exclusive insight into Scotty’s work, and the impact their donations are having on bereaved British Forces children. 100% of this donation goes direct to the Scotty’s Little Soldiers Family Programmes. To find out more, go to overwatch.scottyslittlesoldiers.co.uk

To watch A Hero’s Legacy, go to www.scottyslittlesoldiers.co.uk/news/a-heros-legacy