You are here: Home / News / News / Charity staff limber up for Birmingham Half Marathon fundraising effort

Charity staff limber up for Birmingham Half Marathon fundraising effort

Three members of staff will run the Birmingham Half Marathon to raise money for the veterans’ charity they work for.
Kevin Rudge, Alex Ferguson and Laura Manton are fundraising for a new minibus for Royal Star & Garter in Solihull. 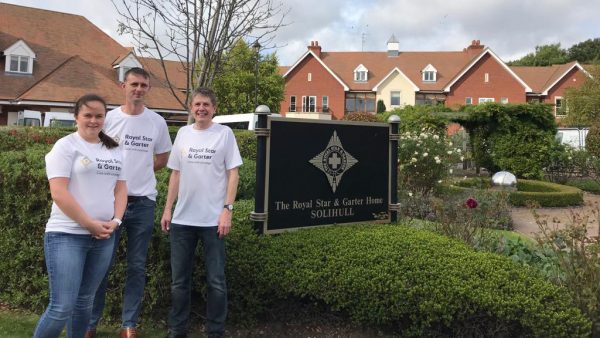 The trio all work for the charity, which provides loving, compassionate care to veterans and their partners living with disability or dementia.
The Birmingham Half Marathon takes place on 13 October.
The charity is very close to Kevin’s heart. His father moved to the Solihull Home in 2012 and spent the last year of his life there. Both his parents-in-law benefitted from exceptional person-centred care before they passed away, and his mother is a current member of the Star & Garter Day Care club.
He said:

“When we came to see the Home for the first time we thought it was like a five-star hotel! And we were bowled over at how staff looked after both residents and the family.”

Following his father’s death, he started volunteering for Royal Star & Garter, and is now the Community Fundraiser at the Solihull Home.
Alex served in the Army between 2003 and 2014, attaining the rank of Lance Corporal. The charity’s Facilities Coordinator said:

“I am privileged to spend my days working in the Homes in Solihull, High Wycombe and Surbiton and witnessing the outstanding care provided to our veterans. I have worked for the charity for almost three years so I think it’s about time I dusted off my running trainers and did my bit to raise some funds.”

The charity is looking to raise funds for a new minibus which will be used to take residents on outings and to medical appointments.
Caley Eldred, Director of Supporter Engagement at the charity, said:

“Our minibus plays an important role in the quality of care we provide but is nearing the end of its useful life. So I can’t thank Kevin, Alex and Laura enough for their efforts. I’m sure the Solihull residents will thank them too.”