You are here: Home / News / News / Covid-19: Time to reflect: Care home manager says virus is ‘the toughest thing I’ve had to deal with professionally’

Covid-19: Time to reflect: Care home manager says virus is ‘the toughest thing I’ve had to deal with professionally’

A Home Manager at Royal Star & Garter has spoken about the pressures and stresses she experienced during the first wave of the Covid-19 pandemic. 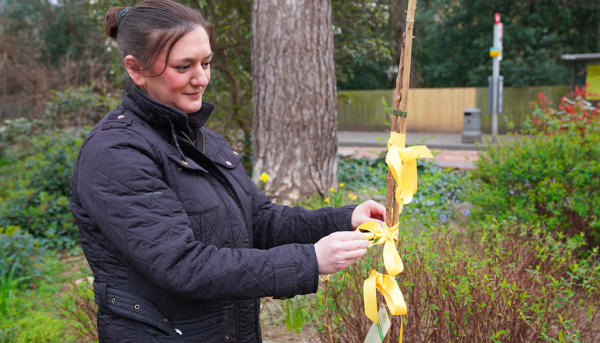 Helena Maher said there were times she felt unable to cope with the weight of the situation, when residents at the charity’s Surbiton Home were contracting the virus in April and May 2020.

She was speaking as part of Royal Star & Garter’s Time to reflect campaign, marking one year since the first lockdown.

Seven residents died at the Home between April and May last year. Some of these residents had Covid-19 listed on their death certificate. Remarkably, nine residents who tested positive went on to make full recoveries.

The first resident tested positive after returning from hospital, with the virus moving through the Home in April and May.

“I’m an experienced nurse, and I really struggled to work out what I could do to prevent it [spreading]. We ramped up training on PPE and handwashing and we instigated regular deep cleans,” said Helena. “During that time, I was finding it really hard personally. I had a lot of sleepless nights worrying. There were times when I felt I couldn’t cope. I remember saying to my husband ‘This is too big for me, I can’t do it, I don’t know what I’m dealing with.’ I spent quite a lot of those evenings in floods of tears. I felt really responsible.”

Seeing residents die without family members with them was one of the hardest things she had to deal with.

Praising staff, she said: “The team have worked so hard, they’ve all pulled together and been incredible.”

Residents at Surbiton have had both doses of the vaccine, and Helena says the Home is in a far better position than it was 12 months ago.

During her career, Helena has worked in A&E, ITU and paediatrics. She was a student nurse at an A&E in Sheffield when the Hillsborough disaster unfolded. But looking back on those days in April and May, she said:

“Professionally, it’s absolutely the toughest thing I’ve had to deal with.”