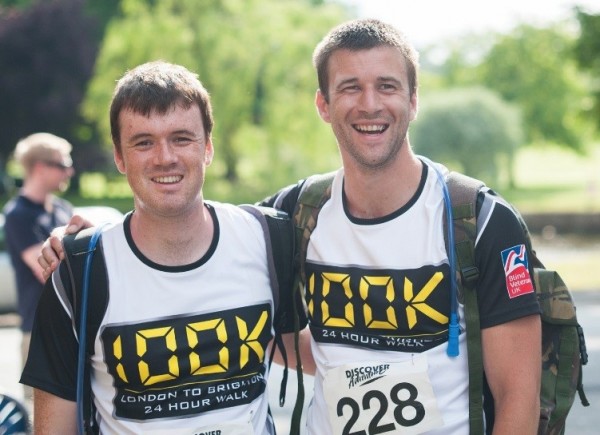 A blind veteran who battled a brain tumour and two bouts of meningitis is set to tackle a third 100km ultra-challenge walk for the military charity who supports him.

Darren Blanks, 30, and a father-of-two from Egremont, hopes to walk from London to Brighton in 15 hours this weekend for Blind Veterans UK, the national charity for vision-impaired ex-Service men and women.

Darren served in the King’s Royal Hussars from 2003, joining up two months before the invasion of Iraq. He completed two tours when he was 18 and 20 years old. After leaving the Army eight years ago, he was diagnosed with Leber’s optical neuropathy, a rare genetic disease that gradually robbed him of his sight.

Following the deterioration of his eyesight, tests revealed he had a benign brain tumour four years ago. He underwent an initial operation to remove the tumour but, as a result, he lost the hearing in his left ear.

The surgery also left him with a small crack in his skull. Then, just weeks later, Darren was admitted to West Cumberland Hospital in Whitehaven with meningitis. A second bout of meningitis resulted in Darren being admitted to the RVI in Newcastle, where he spent eight days in the intensive care unit in a coma.

He says, “I had to leave two jobs – at the Iceland supermarket and working as a postman, and I was in hospital for four months with the brain tumour.”

Since Darren began to receive support from Blind Veterans UK in 2011, the charity has helped him in achieving his life and fitness goals.

Since losing his sight, he has completed both the London Marathon and Brighton Half Marathons this year, with the Cardiff Half Marathon still to go. Previously he’s completed the Great Cumbrian Run and several other events including walking a stretch of Hadrian’s Wall. He was also the Olympic torchbearer for Egremont ahead of the 2012 London Games.

He says, “Blind Veterans UK has given me the independence and confidence to carry on life after sight loss. I’ve always wanted to run the London Marathon and they’ve helped me with that, and last year I went skiing for the first time with the charity.”

To support Darren as he takes on the 100k for Blind Veterans UK, please visit: justgiving.com/darren-blanks5.

To sign up for next year’s 100k London to Brighton, please visit blindveterans.org.uk/100k.