A blind veteran from Durham has received the Life Beyond Sight Loss award from the military charity Blind Veterans UK to recognise her outstanding efforts supporting the charity this year.

Vivian Yates, 86, originally from Corbridge, received the award at the Blind Veterans UK Founder’s Day Awards which were held at the charity’s training and rehabilitation centre in Llandudno last week. 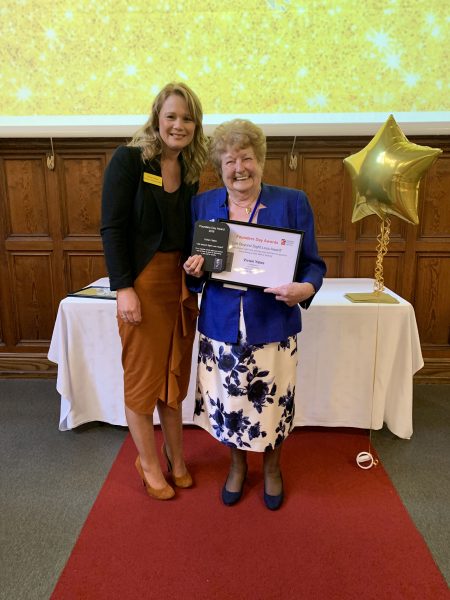 Vivian says: “I feel utterly shocked. I never thought at the age of 86 that I would ever receive such an award.”

Vivian was nominated by Jo Cliff, Community Support Worker, and Carol Johnston, Community IT instructor, who are both part of the North East community team at Blind Veterans UK. She has been awarded for her commitment to the charity and in particular, the help and support she has given its Ferry Hill Community IT training group, mentoring beginners on their IT skills. In their nomination proposal, Jo and Carol said:

“Her first response to any request is ‘Yes, no problem’ and she is a wonderful ambassador for Blind Veterans UK. Vivian is so kind in her expression of thanks and never fails to notice and acknowledge the actions of other people, however small. At her core is a desire to help and support others”.

As well as supporting the IT training group, Vivian has also helped in the arts and crafts department, worked on a Christmas social media campaign and gave an uplifting speech at one of the charity’s blind veteran reunions.

Vivian says: “When I lost my sight, my life came to a standstill. I was stuck in a hole and Blind Veterans UK lifted me out of it. The support I’ve had has given me a new lease of life. I have done an IT course, a sewing course and the charity have provided me with a mobile phone which I use to the fullest extent. I would like to thank all the Blind Veterans UK staff – what a life I have gained.”

“Every year we recognise the achievements of veterans like Vivian who have really demonstrated the values we hold as a charity. Vivian, along with the other nominees and winners, are the shining examples of all that can be done to achieve victory over blindness.”