Sisters Dolly and Leila Wright – aged nine and eight respectively, but already keen fundraisers for a host of charities – will tackle a 25-kilometre (15.5 mile) trek along the Thames for SSAFA, the Armed Forces charity on October 30. 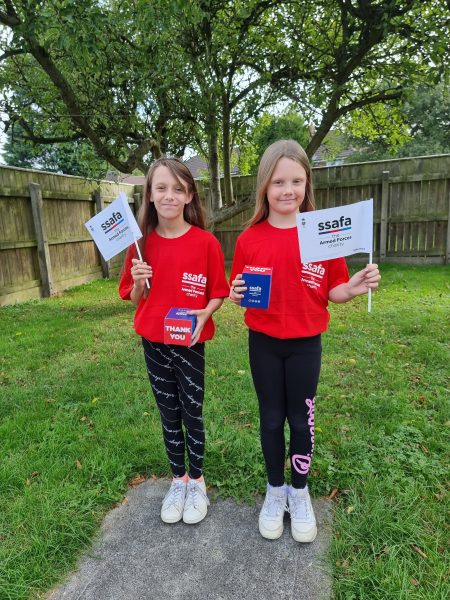 Starting at Putney Bridge and taking in a total of 16 landmark London bridges ending at Tower Bridge, Dolly and Leila are hoping to smash their £200 target on their first fundraising adventure for SSAFA, the UK’s oldest national tri-service military charity.

Twenty-five kilometres is quite a trek for any child, but especially so for Leila, who has hypermobility, which means she often gets pain and stiffness in her joints and muscles.

However, she will have her sister to egg her on, and the support of parents Richard – a sergeant in the Royal Logistic Corps with 15 years’ service – and Donna-Marie Wright. The family has recently moved from Hythe in Kent to the East Riding of Yorkshire where Richard is based at Normandy Barracks, Leconfield.

The young fundraisers, who moved from Palmarsh Primary School in Hythe to Leconfield Primary School, are full of enthusiasm, saying:

“We’re both looking forward to doing the Thames Trek and are hoping to raise lots of money for SSAFA to show support for the amazing work it does.”

“As a military family, we are so proud that Dolly and Leila chose SSAFA to fundraise for because the support it provides to servicemen and women, and their families, is amazing. It was natural that Dolly and Leila decided to raise as much money as they can so that SSAFA can carry on doing its brilliant work.”

“I am extremely proud of my girls, as both a dad and as a serving soldier, that they’ve chosen such an amazing charity that supports fellow servicemen and military families to fundraise for. It’s not going to be an easy trek, particularly for Leila, but I have every confidence in them, and I believe they will smash their target of £200 and raise even more money for SSAFA.”

To support Dolly and Leila as they raise funds for SSAFA, visit gofundme.com/f/dolly-and-leilas-thames-trek-25km-16-bridge.