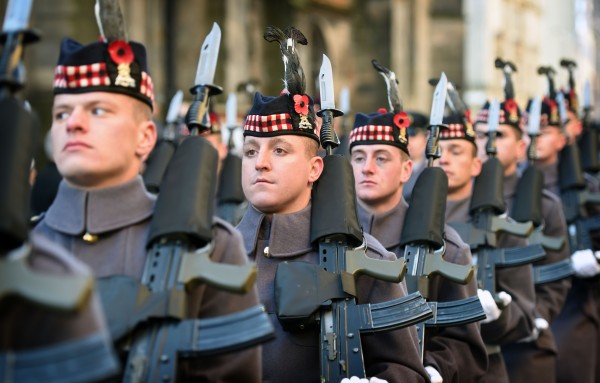 Soldiers from The Royal Regiment of Scotland wear poppies in their head-dress as a mark or respect on Edinburgh’s Remembrance Sunday.

Frank Ross, the Right Honourable Lord Provost of the City of Edinburgh, was joined by First Minister Nicola Sturgeon and fellow politicians, as well as members of the Armed Forces community, for a ceremony at the Stone of Remembrance to mark Remembrance Sunday today (November 12th).

More than 100 wreaths were laid at the poignant service, organised by Legion Scotland at the City Chambers, to remember those who have fallen in conflicts. Sir Alistair Irwin KCB CBE, the President of Legion Scotland and Poppyscotland, read Binyon’s Lines after the bugler had played the Last Post.

One of the wreath-layers attending the service was Anne Blair, whose husband Lieutenant-Colonel David Blair was killed along with 17 other soldiers when the IRA blew up an army convoy in August 1979. At the time of his death, Lt Col Blair was commanding officer of the 1st Battalion, The Queen’s Own Highlanders, at Warrenpoint, Northern Ireland. The attack on his battalion took place just hours after The Queen’s cousin, Lord Mountbatten, was killed.

Mrs Blair, who lives in Edinburgh, said: “It is a terrific honour for me to have been asked to lay a wreath on behalf of the War Widows Association of Great Britain. I was hugely honoured to do it on what is a great occasion.”

Seventy-four-year-old Mrs Blair, who was just 36 when her husband was murdered, added: “I support Poppyscotland like mad and I have an enormous poppy on my car. In fact, it’s too large to take off, so I leave it on all year round! Once a year, I visit the Lady Haig Poppy Factory and I am given three crosses which I place on my husband’s grave.”

Alan Colley, Treasurer of the Boys’ Brigade Edinburgh, Leith & District Battalion, which served as wreath-bearers for the Lord Provost’s party, said: “The Battalion is privileged this year to again be part of the Legion Scotland service. The Boys’ Brigade Battalion in Edinburgh – now Edinburgh, Leith & District Batt – was very involved in both the First and Second World Wars, as were other battalions throughout Scotland, and they were always to the fore in helping in so many ways at home while so many were away fighting for their country.” 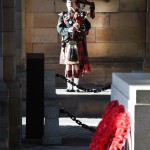 Pipers Remembrance Lament. Cpl Charles macLean, (32) of 2 SCOTS, the Royal Regiment of Scotland at the Service in Edinburgh. 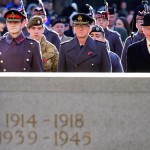 Service Chiefs on Parade in Edinburgh. 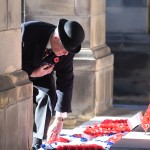 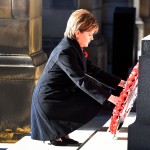 First Minister Nicola Sturgeon at the Stone of Remembrance in Edinburgh,