A Royal Star & Garter resident has enjoyed an unforgettable 95th birthday after the staff at the Solihull Home teamed up with a local school for a trip down memory lane. 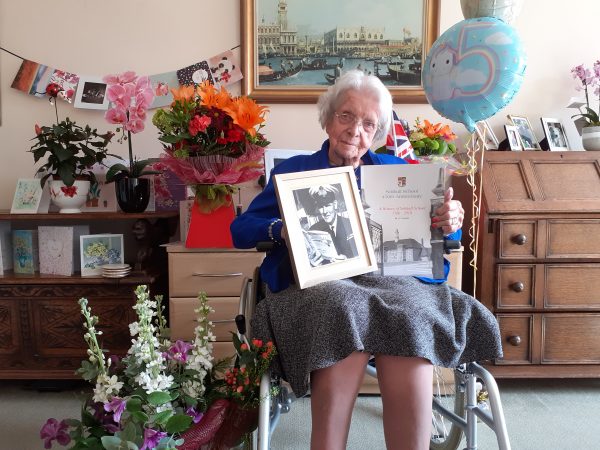 Celebrations to mark Barbara Bale’s special day on Friday 7 May started with a surprise visit to Solihull School on Warwick Road, a place dear to her heart as it was where husband Bill taught Latin for 17 years, before his death in 1969.

Barbara described the visit as “a wonderful surprise” and said she was “absolutely thrilled.”

Royal Star & Garter staff had told Barbara and other residents that they were going on a regular minibus outing but, soon after setting off, it diverted into the grounds of the independent school. A number of Solihull staff were gathered outside the Headmaster’s Wing to welcome the birthday guest, presenting Barbara with a bouquet of flowers and a bound edition of A History of Solihull School 1560 – 2010.

Bill Bale, a Lieutenant Commander in the Royal Navy Fleet Air Arm during WWII, joined Solihull School in 1952. The well-respected and admired teacher was also an officer with the Combined Cadet Force, an outdoor education activity for pupils which is still run at the school today.

Royal Star & Garter is a charity which provides loving, compassionate care to veterans and their partners living with disability or dementia. Driver Kevin Dempsey, who organised the visit, said: “As soon as we discovered Barbara’s close connection with Solihull School we knew this would mean the world to her. We’re grateful to the team in the Development and Alumni Office for helping us make this a very special day for Barbara. It was very emotional for everyone present.”

“Barbara and Bill were an important part of our community for many years, so it was our pleasure to play a small part in her celebrations. We are always delighted to welcome back former pupils and staff.”

Barbara first came to Royal Star & Garter as a day care guest, before becoming a long-term resident. She said:

“It was a wonderful surprise, and I was absolutely thrilled. It was a beautiful day and I’m grateful to both Royal Star & Garter and Solihull School for making it happen.”

The Home is welcoming new residents. For more information, go to www.starandgarter.org/our-homes-and-care/solihull/