You are here: Home / News / News / Ex-Royal Navy engineer Craig Owens is a man on a mission

Having become a self-confessed “Teletubby” on leaving the Navy, 50-year-old Craig is now the driving force behind the Royal British Legion Northern Cycle Ride.

In summer 2016, Craig with the help of some close friends (Neil, Mark, David and Kev) organised the first ever RBL Northern Ride, involving two routes (70 miles and 100 miles) with more than 70 participants – this year he’s hoping to have more than 100 cyclists pedalling the roads of northern Britain to raise money for veterans.

Craig said: “The planning for the next ride on Saturday June 17 is already well under way and we’re hoping to make it even bigger and better than the inaugural ride last year.”

After 23 years in the Navy, Craig looked to be settling for a more sedate lifestyle, until his expanding waistline drew caustic comments from his wife Jacqueline and daughter Natasha. In a dramatic change of lifestyle, Craig has now lost almost five stone and cycles on average 6,500 miles every year.

He remains a keen cyclist despite a dreadful incident when he was thrown from his bike in November 2013 and needed two operations on his knee and arm – but just ten months later he was back in the saddle, taking part in a ride to Paris to raise money for the Legion. 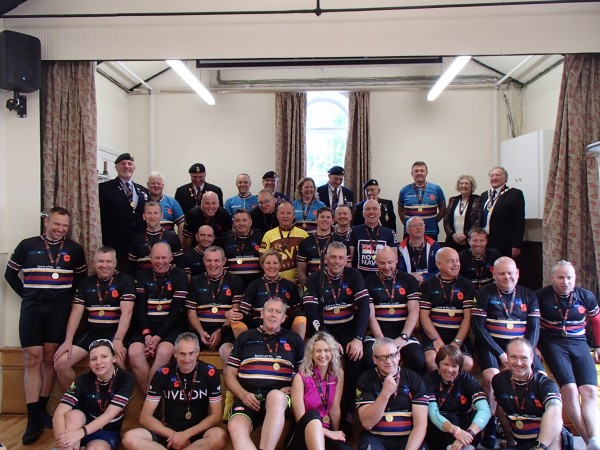 Craig said: “After the accident I was determined to get back on the bike, even though it was painful, but I managed to do it. It was a frustrating time, I was bored! And I really don’t like hospitals. But I was lucky to be alive, if I hadn’t been wearing a helmet I don’t think I would be here today.

“I’ve now done the Pedal to Paris event numerous times and a RBL ride from Sandhurst to Portsmouth dockyard, raising money for veterans, and I cycle virtually every day around Teesside.”

He has a passionate belief in the work of the Royal British Legion, but also personal reasons for getting on his bike and making a difference. He said: “I started to see a lot of lads at the back end of my Service who were in need of support and advice, and I simply saw the Legion doing a lot of good.

“As it turned out, I needed some impartial advice when I left, having sustained some injuries working as an engineer, and I got the help and the contacts I needed through the Legion to sort out my medical pension.  Through doing these rides, I’ve also met lots of other people who have benefited from their work.

“I know every penny counts and I know all the money received is used in the right way.  The Legion doesn’t turn its back on anyone. It’s a cause that’s close to my heart and those of the people I cycle with. When I needed some advice I was able to approach them and I have friends who’ve done the same.”
But the RBL Northern Ride isn’t just about raising money, as Craig says: “Our emphasis is actually to raise awareness and if we manage to raise sponsorship as well, then that’s a bonus. We want people to come along and enjoy the day, take in the atmosphere and talk to each other. It’s not just for veterans; it’s for anyone who wants to know what charities such as the Royal British Legion are all about.”

Peter Milne is Community Fundraiser for the Royal British Legion in Durham, Sunderland and North Tees – he said: “I am very excited to be working with Craig and his team again. The funds raised make a real difference to our beneficiaries and promotes the important work we do, especially in the North East. The Royal British Legion takes pride in supporting Challenge Events like this. The local support has been fantastic, and it’s great that the Royal British Legion Billingham Branch once again will be involved in the awards ceremony.”

Father-of-two Craig is also hoping that businesses across the region will step forward with sponsorship to support this great event and he already has support from Primal Europe Ltd, Cab App and Torq.

Both routes will start at the Sporting Lodge Hotel, Stainton, and finish at the TA centre in Coulby Newham, Teeside, and the Ride will raise money for the Royal British Legion and Phoenix House Recovery Centre in Catterick.