A soldier who suffered serious head injuries in a bomb attack while serving in Iraq enjoyed VIP treatment at his beloved Fulham FC on Saturday (2 November). 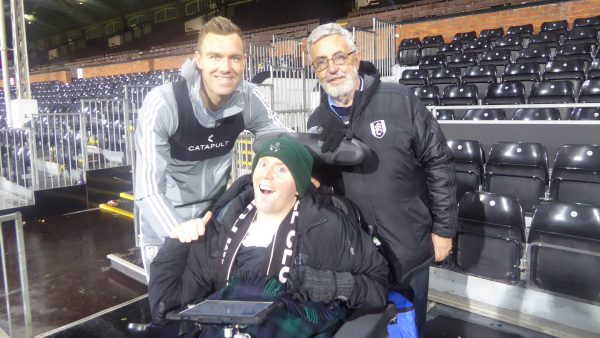 Stephen Vause had been invited to a game of his choice at Craven Cottage by players Kevin McDonald and Cyrus Christie when they paid him a surprise visit at Royal Star & Garter in Surbiton in September.

The sold-out match against Hull on Saturday, which Fulham lost, was the west London club’s official Remembrance match. It featured a memorial for military personnel, with wreaths laid in the centre circle before the kick-off. The Last Post was also played, and a silence observed. 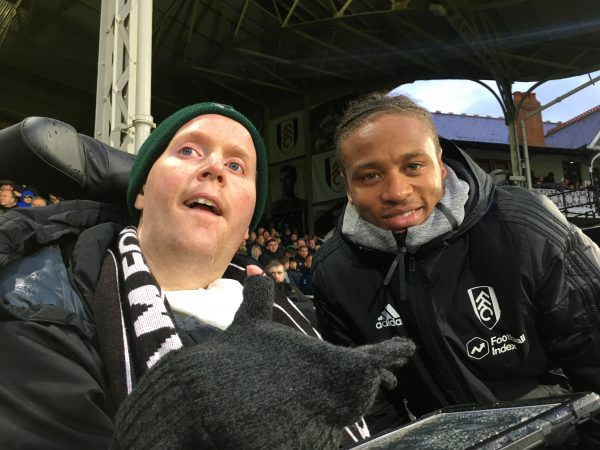 The special day saw Stephen, 32, meet forward Bobby Decordova-Reid and Kevin McDonald. He was presented with a club scarf and a copy of the match day programme signed by star striker Aleksandar Mitrović. Stephen later said:

“The game was good and I enjoyed it, I am very thankful for the tickets. Next time I go we will win!”

During their visit to the charity’s Home in Upper Brighton Road, McDonald and Christie also gave Stephen a shirt signed by the squad, and a signed book featuring press cuttings from Fulham matches over the years.

The visit had been arranged by former Kingston Conservative Councillor Andrew Day and Royal Star & Garter care staff, who form close friendships with the residents and love to arrange treats and surprises for them. Mr Day was also at Saturday’s match with Stephen.

Stephen was just 19 and on his first tour in Iraq, serving with the 4th Battalion The Rifles, when he suffered brain injuries in a mortar explosion near Basra in 2007. The attack left him severely disabled. Royal Star & Garter has been caring for him since 2015.

Following the game, Kevin McDonald said: “It was our pleasure to invite Stephen to the match on Saturday against Hull City, which was our designated Remembrance fixture. Despite the result of the match, I hope Stephen enjoyed his day at Craven Cottage. It was a real honour to host him.”

Both Christie and McDonald had praised Stephen after visiting him at Royal Star & Garter. McDonald said:

“When you consider what Stephen’s been through it’s an honour to meet him.” And Christie, whose brother was in the Army for 10 years and served in Afghanistan, said it was “humbling” to meet Stephen. He added: “He’s a true inspiration.”

Royal Star & Garter provides loving and compassionate care to veterans and their partners living with disability or dementia. It also has Homes in Solihull and High Wycombe.