Relatives of local military veterans have gathered to see their loved ones celebrated at The Royal Star & Garter Home in High Wycombe.

The Charity named floors after four heroes from the High Wycombe and surrounding areas and held a special ceremony on 23 May 2019. 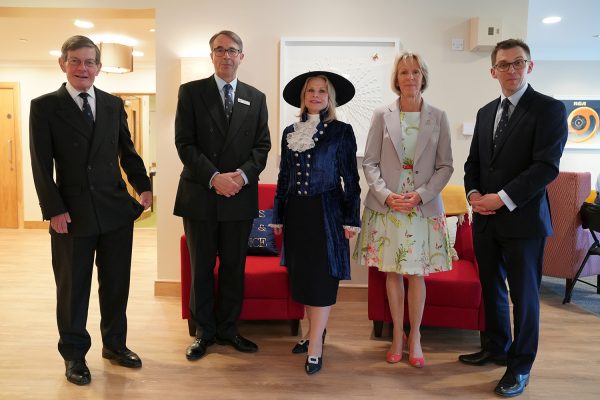 Frank Adams, Anthony ‘Bugs’ Bendell AFC OBE, Edward Brooks VC and Lettice Curtis have all been honoured at the state-of-the-art care home. Their relatives – and VIPs including the Lord Lieutenant for Buckinghamshire Sir Henry Aubrey-Fletcher and High Sheriff of Buckinghamshire Julia Upton MBE – were taken to see the framed citation and photo of their loved one during a tour of the £25m home.

Relatives of those honoured later spoke of their pride.

Karen Robinson, granddaughter of Frank Adams, said: “The Home is wonderful. It’s beautiful and calming and I think it will make residents feel very special and cared for. The facilities are amazing. I think it’s a great honour to have his [Frank Adams] name here. He’s mainly known for football, but this will mean he’s recognised for his war history and service in the RAF.”

Emma Bendell, daughter of Bugs Bendell, said: “I’m incredibly proud. He had a great deal of desire to come to this Home and it’s lovely that he will be here forever in spirit. I think he would be secretly delighted.”

Keith Brooks, grandson of Edward Brooks, said: “It’s brilliant here, the attention to detail is the main thing, they seem to have thought of everything. I think this is brilliant tribute to my grandfather and to all other veterans who have served their country.”

Tish Peal, niece of Lettice Curtis, said: “I think the Home is amazing. I imagine it’s a really lovely place to come and stay.” And on the floor being named after her aunt, she added: “I think it’s terrific. It’s very fitting to see her honoured here. She had a tough time in her generation, being a woman and not being recognised for her achievements, so this is very special.”

Sir Henry, the Lord Lieutenant for Buckinghamshire, said: “It gives me great pleasure to witness the opening of this new facility, providing residential care and respite for Buckinghamshire veterans and their partners including those living with disability or dementia. It is an asset to the county and to our Armed Forces veterans, to whom we all owe a great debt.”.

The High Sheriff of Buckinghamshire, Julia Upton MBE, said: “I am truly delighted to see such a wonderful home being created for the care of disabled veterans and their partners. When people have served their country, often undertaking very dangerous tasks to protect others, it is our duty to care for them. The staff at The Royal Star & Garter Home will ensure they live their lives to the full, with the comfort to know they will always be cared for.”

The Royal Star & Garter Homes Chairman Major General Tim Tyler said: “It is a privilege to name our floors after people who served their country with courage and distinction. Their names and deeds will always be remembered here, and we are delighted to pay them this tribute.”

The 74-room home cares for ex-Servicemen and women living with disability or dementia, and welcomed its first residents in April. For more information on residency, email hw.enquiries@starandgarter.org or call 020 7451 9777.

The four men and women were chosen after members of the public put forward the names of people with strong links to the military and the local area in the Charity’s Who’s Your Hero Competition. The Charity wanted to celebrate and remember their deeds at its new Home. The Home’s floors are named after:

Adams House is named after Frank Adams, a hugely influential figure in High Wycombe. He served in the Army and then the Royal Flying Corps in the First World War, and in the RAF following the outbreak of the Second World War. The ground floor will be named after him.

Frank is perhaps best known for his connection with Wycombe Wanderers Football Club (WWFC), whom he played for and captained either side of the First World War. Following the Second World War, he purchased Loakes Park, the home ground of WWFC and handed over the deeds of the land in 1947. Frank was made Patron, and its new stadium, which the club moved to in 1990, is named Adams Park after its benefactor.

Bendell House is named after Wing Commander Anthony ‘Bugs’ Bendell, who lived at the Charity’s Richmond and then Surbiton Homes. He was ranked among the RAF’s most skilled and talented pilots during the Cold War period. Bugs and his wife Jules were local to High Wycombe, and together they played an active part in life at the Surbiton Home and key events, such as the ground-breaking ceremony for the High Wycombe Home. Bugs had hoped to be one of the first residents but sadly died in 2016. The first floor of the new Home will be known as Bendell House.

Brooks House is named in honour of First World War hero Edward Brooks, who was awarded the Victoria Cross for “most conspicuous bravery” under enemy fire when he single-handedly captured a German machine gun post firing on the infantry troops in trenches near Fayet, France, on 28 April, 1917. His VC citation read that “he undoubtedly prevented many casualties.”

Edward was born in Oakley, Buckinghamshire and went on to serve in the 2 /4th Battalion, Oxfordshire & Buckinghamshire Light Infantry. The second floor of the new Home will be known as Brooks House.

Curtis House is the Home’s specialist dementia centre, and is named after pioneering pilot Lettice Curtis. She served with the Air Transport Auxiliary (ATA) which was responsible for ferrying military aircraft to locations such as airfield and frontline squadrons during the Second World War. Lettice ferried an astonishing 1,467 aircraft during the conflict, and is widely regarded as the first woman to qualify to fly a four-engined bomber in the UK. She lived in Twyford and White Waltham, near High Wycombe, for many years before her death in 2014, aged 99.