You are here: Home / News / News / Feature film “Tomorrow” puts PTSD and Veterans in the spotlight

Feature film “Tomorrow” puts PTSD and Veterans in the spotlight

A star-studded feature film about a veteran injured in Afghanistan hit cinemas last Friday. Stephen Fry and Joss Stone are among the cast of Tomorrow which explores how friendship, love and courage can overcome great odds. The film has teamed up with charities which deal with the sensitive issues it covers, including veterans’ charity FirstLight Trust which runs veteran cafe hubs across the UK.

“The Tomorrow team approached us as they’re passionate about supporting veterans – and passionate about good coffee too which makes us the perfect match!” explains FirstLight Trust’s founder Dorinda Wolfe Murray. “The film is exceptional. It’s about prejudice and miscommunication. It’s about the power of empathy, understanding and love. But most of all Tomorrow is about the courage – the everyday courage that keeps us going – which we see all the time in our work with veterans.”

“We’re very proud to be supporting FirstLight Trust,” says writer, actor and producer Stuart Brennan. “After visiting their cafe hubs, it is obvious the work they are doing is not just important, but essential. The themes and issues that our movie Tomorrow deals with will hopefully encourage attention and public engagement in these areas, increasing support and awareness for FirstLight Trust.” 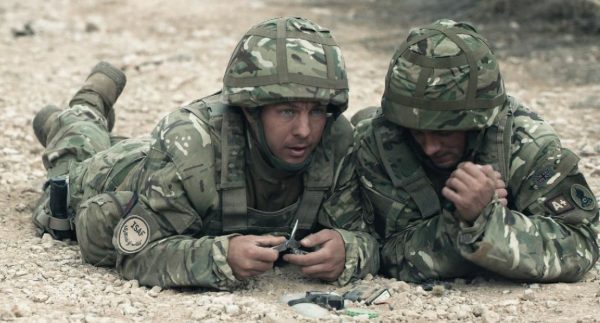 Executive produced by Martin Scorsese, Tomorrow explores the difficulty and loneliness soldiers encounter as they try to reintegrate back into society having served their country. It deals with moving on from losses and injuries to forge a life, find sustaining work and experience love. Tomorrow has already won the Audience and Jury Award at the Napa Film Festival, Best Narrative Feature at the Savannah Film Festival and the Jury Award at the Sunscreen Film Festival.

“The movie is fictional, but the issues are real and we’re incredibly grateful to be beneficiaries of Monday’s sold-out charity Leicester Square premiere in London. The Tomorrow team have also created mini-videos blending film clips with interviews with our veterans in our cafe hubs to highlight where characters like Tesla can find support and camaraderie in real life. Seeing veterans realistically depicted on the big screen is a huge boost to those that served. We wish Tomorrow every success.”

The ten mini-videos blending film clips and interviews with real-life FirstLight Trust veterans and cafe hub coordinators can be viewed on YouTube at: https://www.youtube.com/channel/UCCfEaqUMQUVhEnM66sBOMFQ/

Tomorrow will be shown at cinemas in Bristol, Camberley, Edinburgh, Leeds, London, Portsmouth from 27 September as well as Forces Cinema screenings in Cyprus and the Falklands plus venues across the UK. A full list is available at: https://www.tomorrowfilm.uk/tomorrow-film-screenings

For more information or a high-resolution 2.3MB version of the attached still from Tomorrow, please email FirstLight Trust founder Dorinda Wolfe Murray at enquiries@firstlighttrust.co.uk or call 07464 828 049