You are here: Home / News / News / From the UK and USA to Afghanistan and Oman, Forces Wives Challenge scale the height of Pen Y Fan from home for charity

From the UK and USA to Afghanistan and Oman, Forces Wives Challenge scale the height of Pen Y Fan from home for charity

Over 20 other charities also received donations as a result of the event. 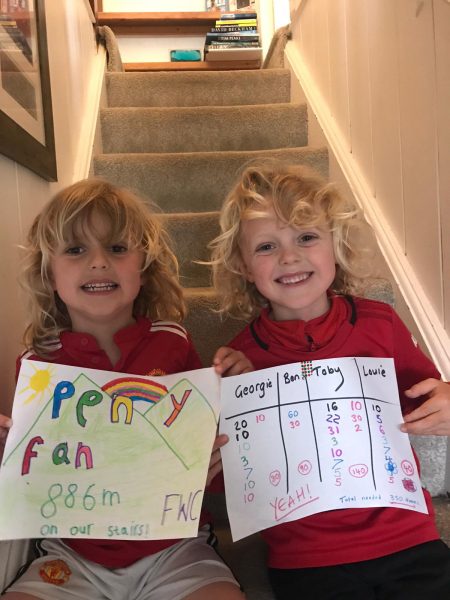 The event saw a whole host of families from all over the world, including military and non-military, take up the challenge to climb the 886m to the top of the peak from their own homes.

Challengers from as far as Nashville Tennessee in the USA, Oman and Afghanistan, all with their own reasons for taking part, completed the climb to help raise much needed funds for a charity which is close to the hearts of many of those in the British military community.

Military wife Tara in Catterick Garrison and her husband Richard were one family who despite being in different continents wanted to complete the challenge together as a family. Currently serving in Afghanistan, Richard was determined to join his wife and children in raising money. They were also joined by 71-year-old, Grandma, who was self-isolating in Nottingham.

“Richard has been in Afghanistan for six months, so this challenge came at the perfect time. With the coronavirus pandemic, Richard’s tour has recently been extended by a few weeks so keeping our family together has been a challenge. We thoroughly enjoyed climbing Pen y Fan virtually as a family, with Richard managing to do his bit too, and for the children having Grandma involved was amazing.

“We raised money for Scotty’s Little Soldiers, it is such a great cause, and thanks to the Forces Wives Challenge we had such a great day together as a family.”

RAF Sergeant Georgie was also amongst the group of families taking part in the challenge. Georgie who suffers from multiple sclerosis was supported in the challenge by her children and keyworker husband Daz. The couple have been separated due to Daz’s work as a Royal Mail postman, and completed the challenge in two different locations; Daz completed his part during his daily post round in Wales, before returning to join his kids on the stairs at home, whilst Georgie completed her climb in Bristol.

“During a difficult separated isolation period, participating as a family in the Forces Wives Challenge virtual Pen y Fan has given us a common focus and challenge which of course as a military family we welcomed.”

Made up of over 550 military wives and partners globally, the Forces Wives Challenges was established in 2018 by former Army regular Heather. The group had originally organised to take part in the climb later in the year, however due to the lifestyle changes put in place last month the event was brought forward creating a virtual climbing event that not only the group, but anyone looking for a challenge, could take part in to help raise money for charity.

Commenting on the event Heather said:

“I have been absolutely overwhelmed by the level of support for this year’s event, everyone has been fantastic at getting involved and raising money. It has been amazing and much bigger than I ever expected. Scotty’s Little Soldiers is a charity that resonates so much with the Forces Wives Challenge. Many of the group are mums so we fully appreciate and respect the work the charity does to support children who at such a young age have experienced the loss of a parent. It’s been a pleasure and an honour to raise money for them.”

Every year members of the group climb Pen y Fan for charity, and this year they chose Scotty’s Little Soldiers, a charity that more than ever needs fundraising support to ensure the integral support it provides to its members can continue.

The charity was founded in 2010 by war widow Nikki Scott after her husband, Corporal Lee Scott was killed in Afghanistan the previous year, leaving behind two young children. The charity does lots of things to support its members, including providing access to the very best health and wellbeing care, offering outstanding development opportunities through a range of activity and educational grants, and Scotty’s helps put smiles back on those brave faces by providing respite breaks, posting them birthday and Christmas presents and remembering the anniversary of their parent’s death.

“I can’t thank Heather and the Forces Wives Challenge enough for their support and effort. It was incredible to watch those taking part live on social media and for so many people to come together in one day is just fantastic.

“Our families need us more than ever so every penny helps to ensure we can continue to deliver the high standard of support they need at this time of uncertainty. Only with the help of people like Heather and those taking part in this challenge can we continue to do what we do for our members.”

Nikki witnessed ﬁrst hand the effect the loss of a parent can have on a child. It was on a family holiday some 9 months after Lee’s death that Nikki saw her 5-year-old son Kai laugh and smile for the ﬁrst time since his dad’s death. Nikki realised there must be so many more children who had also lost a parent who served in the British Armed Forces but hadn’t had that opportunity to smile again.

She decided to set up the charity Scotty’s Little Soldiers to do just that, to help their children smile. That was back in 2010 and since then Scotty’s has continued to grow and the support available to the children has developed. In 2019 alone, Scotty’s supported 410 children across the UK.

Scotty’s Little Soldiers was honoured to be one of seven charities chosen to benefit from donations marking the wedding of Prince Harry and Meghan Markle and the couple have since shown regular support for the charity.