You are here: Home / News / News / “Gardening provides me with an escape from the real world”

“Gardening provides me with an escape from the real world”

Keen gardener Amileigh Salt, based at RAF Leeming, met garden designer of the RHS Chelsea RAF Benevolent Fund Garden, John Everiss, at the station’s Polytunnels. They discussed their love for gardening and how it helps with their mental health… 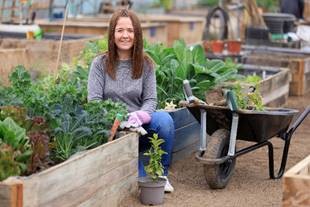 For some people, gardening is just a hobby. However, for others, gardening can provide transformative growth – not only for the flourishing flowers, but for their mental health. For Amileigh Salt, having her own plot at the Polytunnels at RAF Leeming, provided by the RAF Benevolent Fund, has made a huge difference to her outlook on life.

The RAF has always been a big part of Amileigh’s life, first as the daughter of an RAF serviceman and now as the wife of a Corporal second line engineering support, workshop supervisor.

Ahead of the unveiling of the RAF Benevolent Fund Garden at RHS Chelsea on 24-28 May, Amileigh met Lancashire-based garden designer John Everiss to give him a tour around the Polytunnels at her station, exchange planting tips and discuss how gardening helps with their mental health.

“Gardening has helped me massively, especially during the lockdowns. I’m someone that suffered with mental health from a young age. My dad served in the RAF when I was a child, and as result of moving, I suffered with alopecia from about the age of 10 from stress.”

“Then, growing up as an adult, I’ve suffered with depression and anxiety. Coming to the Polytunnels gives me a sense of escape from the real world. It eases the burden and takes the weight off my shoulders.”

“There are all sorts of strains and pressures we face and even doing Chelsea Flower Show means that there is a lot of pressure riding on me. However, when I’m working, I make sure I take a moment to sit down and really look where I am – it’s not all about being head down and getting the job finished – I take the time to appreciate my surroundings, and I encourage my team to as well. I’m very lucky I get to spend my time gardening outside – it’s helped with my mental health tremendously.”

Like Amileigh, John has family connections to the RAF which provided his inspiration for the RAF Benevolent Garden at RHS Chelsea. He said:

“My father, Stan, was a navigator on Stirling bombers, and survived after being shot down over occupied France in 1943. After being hidden by local resistance fighters he was eventually guided over the Pyrenees and eventually reunited with his family after four months.”

The RAF Benevolent Fund Garden will feature a sculpture of a young pilot looking up at the sky. Standing at four metres tall and constructed from 1,200 layers of laser cut stainless steel, the state-of-the-art sculpture will be imposing and a moving tribute to all those who have served and continue to serve in the RAF.

The garden has been designed to allow visitors to sit and reflect on the service and sacrifice of all RAF and civilian personnel and we hope will inspire viewers to look into their own history and speak to family and friends about their connections to the RAF.