You are here: Home / News / News / Grimsby pub ‘thank you’ fundraiser for SSAFA

Two local women joined forces to lay on a fundraiser in their local pub, the Corporation Arms on Freeman Street in Grimsby, in aid of SSAFA, the Armed Forces charity with a total now standing at £317.59. 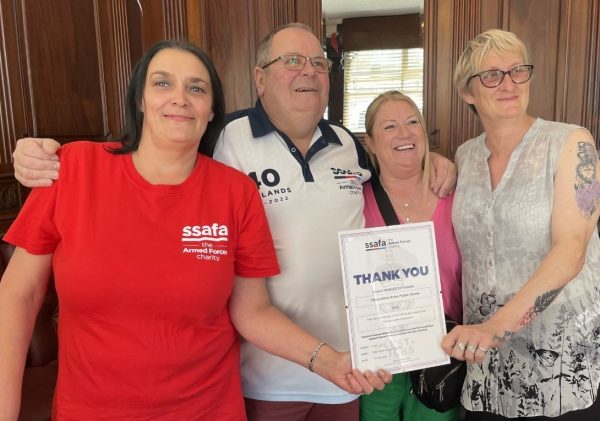 One is Donna Illingworth, the pub’s manageress, whose association with SSAFA dates to a sad time in her life.

Her husband, Anthony, was a Reservist with 7th Battalion The Rifles, a role and duty he had enjoyed for more than six years.

Anthony died in 1998 with a heart defect, leaving Donna with five small children to raise.

Donna admits that it was an immensely tough time for her, saying:

“I found it very hard following the loss of my friend and partner, and if I’m honest, I didn’t know what to do.

“But after speaking with SSAFA, and acknowledging my feelings – even the ones you don’t’ like – its volunteers helped and supported me and my children by organising two ‘Poppy Holidays’ for us, something I really wasn’t expecting.

“I can’t really express my profound appreciation enough, but supporting this fundraiser is my way of saying ‘thank you’ to SSAFA for all the help it gave me then, and all the help it’s giving people now.”

Also organising the fundraiser for SSAFA was Jodie Potter, who has worked for the Ministry of Defence since 1986.

Her work took her to many places well-known to anyone who served in the British Army of the Rhine, places such as Osnabruck, Hameln, Joint Headquarters Rheindahlen, Dortmund, Paderborn, and Monchengladbach, as well as back in the UK in York.

“Having seen how SSAFA manages welfare matters for service personnel and their families, the affection and emotion I have in supporting this amazing charily will always be part of my past and future.

“Although I had witnessed the help SSAFA has given to so many, It really brought it home to me when I met Donna in the Corporation Arms, my local.

“We chatted, she told me about the immense help SSAFA had given her during a really tough time, and we decided to put on this charity event. The rest is history.”

Jodie added that the event was not only well supported by others at the pub, but was also an opportunity to let people know about SSAFA, the UK’s oldest tri-service charity, which has helped veterans, serving personnel, and their families since 1885.

Presenting a certificate of gratitude to the pub, Mark Trainor, a Falklands veteran and SSAFA’s Divisional Secretary for Grimsby & Cleethorpes, said:

“Hearing Donna’s story and learning how SSAFA helped her and her family all those years ago is the reason we do this. I must give my thanks on behalf of SSAFA to her, to Jodie, and all at the pub for supporting our life-changing work.”

For more information including how to volunteer or hold your own fundraising event, visit ssafa.org.uk/lincolnshire.