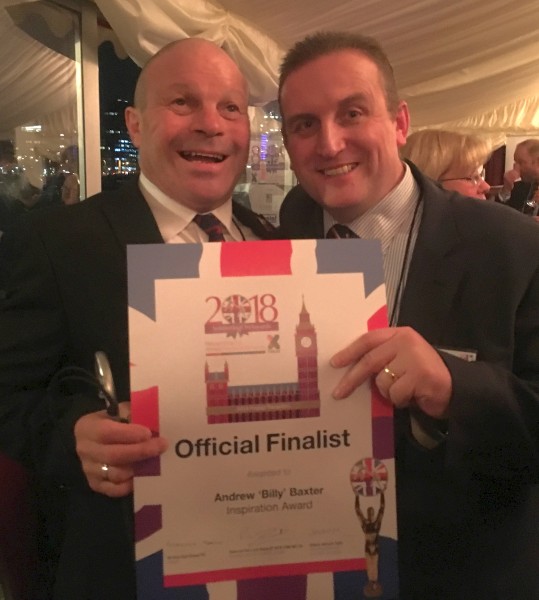 A blind veteran from Gwynedd has been nominated for a prestigious Soldiering On Award for his work with Blind Veterans UK, the national charity for blind and vision-impaired ex-Service men and women, from whom he also receives support.

Billy Baxter, 54, is the charity’s Rehabilitation and Liaison Officer in its training and rehabilitation centre in Llandudno. His role sees him mentor and motivate the charity’s beneficiaries. Regarding his nomination, Billy says: “It’s a great honour to be recognised in the Inspiration Award category among my fellow nominees, who themselves have done some truly extraordinary work.”

Mark Lovatt, Blind Veterans UK Director of Operations, says: “Billy’s been with us since 2011 and has proven to be an irreplaceable member of the Rehabilitation Team. His ability to inspire people is limitless and he has an innate way of making people smile with his kind words and advice.

“He regularly encourages people to try new things and step outside their comfort zones, and it’s been a pleasure to witness, first-hand, the number of blind veterans’ lives he’s transformed.”

The Soldiering On Awards recognise the outstanding achievements of those who have served their country, as well as the people who work in support of the Armed Forces Community. Billy is nominated in the Inspiration Award category, which is sponsored by telent.

Billy has no sight at all, having lost his vision following his Service in Bosnia in 1997 as a Royal Artillery staff sergeant. He was discharged from the Army and as a result lost the career he loved. He explains that, initially, he was sceptical as to how the charity might be able to support him: He says: “I simply couldn’t accept losing my sight and tried to hide it from friends and family as much as possible. I couldn’t believe that anyone else would understand what I was going through.

“It took quite a while before I was convinced to start receiving support from Blind Veterans UK, or St Dunstan’s as it was known then. I went for a week at the charity’s Brighton centre to be assessed and it saved me. I’ll never forget coming home afterwards and hearing my wife say, ‘we’ve got our Billy back’”.

“The most important things Blind Veterans UK did for me was showing me that life doesn’t stop when you lose your sight and that there would always be support for me and my family.”

Billy wasted no time in throwing himself into everything and anything he could to give back to the organisation he credits with saving his life. In 2003, he set the blind solo world land speed record on a motorbike, with a speed of 164.87mph. He also took part in various skiing and horse-riding trips and completed a number of marathons.

Billy explains that, initially, his fixation with extreme activities was employed as a coping strategy of sorts. He therefore made the decision to go back to work, eventually enrolling on a two year BTEC Performing Arts Course. Later, in 2011, he applied for a post with Blind Veterans UK at the charity’s training and rehabilitation centre in Llandudno. It is here that he’s spent the past seven years motivating and inspiring all those around him.

Mark adds: “Our new blind veterans have the tendency to arrive feeling particularly anxious. Within days of being with Billy, they grow six inches. Confidence oozes out of them and they become the person they were before losing their sight.”

Billy is known to many in the local area as he is also the Town Crier for Llandudno and uses the local events to raise awareness for the vision-impaired military community. He was also selected as an official Olympic Torch Bearer in the lead up to the 2012 Olympic Games.

The 2018 Soldier On Awards will take place in London on Friday 20 April. For more information, please visit: soldieringon.org.