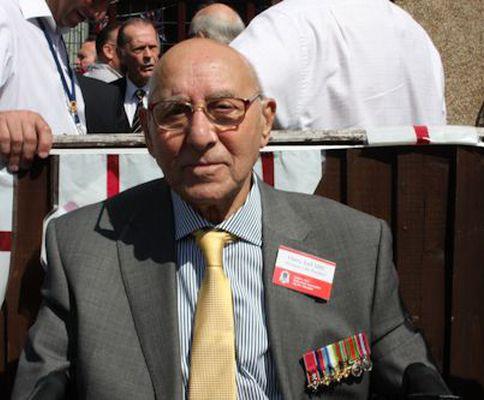 It is with great sadness that the Taxi Charity for Military Veterans announces the passing of its Honorary Life President, Harry Joel, MBE, on 28 October 2018. Harry worked tirelessly with the charity and said, “As long as there is conflict and war around this world, there is a huge need for organisations like The Taxi Charity For Military Veterans and the work it does”.

President since 2006 Harry was a dedicated and hugely supportive volunteer who will be greatly missed; our thoughts and prayers go to his daughter Lee and his grandchildren Alex, Ben and Natalie.

At the outbreak of WWII, Harry was too young to join the armed forces but eager to help, he joined the Home Guard and became a bicycle messenger.

In 1943, aged 19, Harry was called up to join the Royal Navy, and sailed to Nova Scotia to join HMS Dittany. Once on board they sailed back across the Atlantic to Gibraltar and went on U Boat Detection and Destroying duties. Harry’s ship was responsible for sinking at least one enemy submarine and the survivors, were put on Harry’s sick bay for treatment.

Harry was then posted to the Royal Naval Hospital at Trincamalee, Ceylon (Sri Lanka) where he cared for wounded and seriously injured troops, until he was posted back to England and demobbed in 1946.

After the war, Harry joined the Merchant Navy as a Medical Officer, serving with the Anglo Saxon Petroleum Company and in 1951 he married Frances. They had a much-loved daughter Lee and remained blissfully happy until Frances passed away.

In 1955 Harry became a London Cab Driver and was soon asking if he could help the London Taxi Benevolent Association For War Disabled (as the Taxi Charity For Military Veterans was then known).

Harry recognised that the Taxi Charity needed more support from the public and taxi drivers for these heroes and set about organising ways of achieving exposure and publicity to highlight the plight of war veterans and the work of the charity.

In recognition of his support, the charity made Harry, Honorary Chairman and in 2006 he became Honorary Life President. To his great delight, Harry was awarded an MBE in 1981 for services to charity.

About the Taxi Charity: