Her Royal Highness Princess Alexandra spoke to residents at The Royal Star & Garter Home in Surbiton and viewed some of the state-of-the-art equipment available there during a visit on Wednesday 23 January.

Her Royal Highness was at the Home as part of the Founders’ Day celebrations, marking the Charity’s 103rd anniversary.

Princess Alexandra has been President of the Charity, which cares for ex-Servicemen and women and their partners living with disability or dementia, since 1964. Her cousin, Her Majesty The Queen, became The Royal Star & Garter Homes’ Patron in 1953. 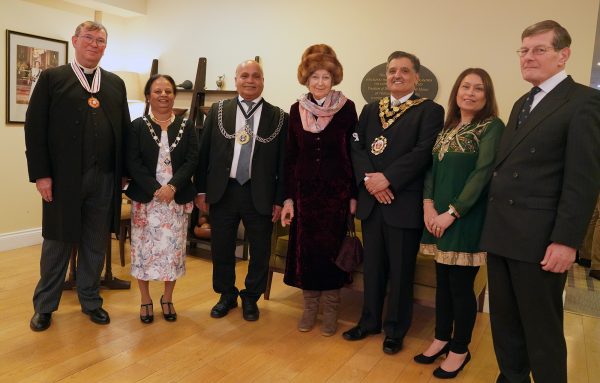 The visit was one of two events held at the Surbiton Home to mark Founders’ Day, and followed a Tea Party earlier in January to celebrate the special day.

Her Royal Highness was received by Fr Martin Hislop, Deputy Lieutenant for Kingston upon Thames and Vicar of St Luke’s Church of England Parish, before meeting The Royal Star & Garter Homes’ Deputy Chairman Malcolm Chapple, and the Mayors of Kingston and Richmond. She also met long-serving Charity volunteer John Parvin, who was awarded the British Empire Medal in this year’s Queen’s New Year’s Honours list.

Her Royal Highness then chatted to residents in the café-bar area who were flower arranging, before going upstairs to see a weekly exercise programme held at the Home’s Physiotherapy Room.

Before leaving, Princess Alexandra also spoke to long-serving staff – some of who have worked more than 30 years for the Charity – and was presented with a posy by a resident.

“It was very nice talking to her. She was very friendly and easy to talk to. I thought it was lovely that she came to the Home, it was an honour.”

The Royal Star & Garter Homes was set up to care for severely injured young men returning from the battlefields of the First World War, opening its doors to residents on January 14, 1916.

We are in the process of building new Homes around the country to provide specialist nursing care for disabled ex-Service people in the best modern surroundings, including dementia care facilities to address this growing need. The Charity has award-winning Homes in Solihull, West Midlands, and Surbiton, Surrey, which also enables the Charity to offer interim care for young disabled Service personnel. Following the successes of the first two Homes, a third Home in High Wycombe, Buckinghamshire, is being built, with a planned opening in 2019.