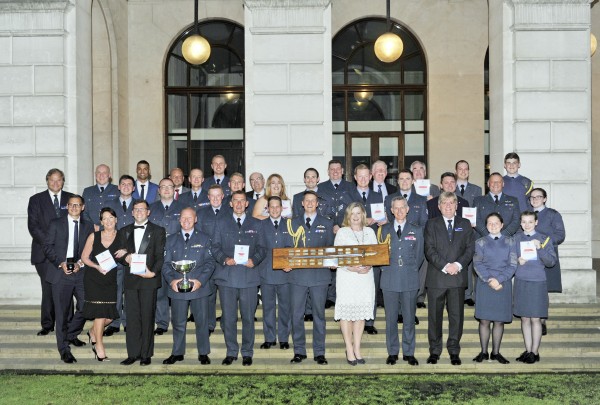 A celebration of supporters was held last night at the RAF Benevolent Fund’s annual awards ceremony, in London.

The recipients of 10 awards spanning RAF Station of the Year to incredible corporate support were announced, watched by an audience of RAF personnel, including Chief of the Air Staff, Air Chief Marshal Sir Stephen Hillier and beneficiaries of the RAF’s leading welfare charity.

As in previous years, the night’s most hotly contested award was the RAF Station of the Year which went to RAF Marham.

Throughout 2017, personnel from RAF Marham carried out a host of fundraising challenges, all in aid of the RAF Benevolent Fund. Personnel reached new heights when they scaled Mount Kilimanjaro, the team galvanised public interest and participation in events such as the New Year’s Eve 10K and GEAR 10K and they hosted many other fundraising activities such as quizzes, golf tournaments and even a Tornado pull during their Families’ Day.

RAF Marham’s collective efforts have raised more than £30,000 for the RAF Benevolent Fund.

Air Vice-Marshal David Murray, Chief Executive at the RAF Benevolent Fund, said: “The annual awards ceremony are a highlight in the RAF Benevolent Fund’s calendar as it’s a chance for us to champion all of our wonderful supporters and share the incredible stories of the people they enable us to help. This year’s cohort of nominees and award winners are all truly inspiring; their creativity and endeavour to continue to support our charity is what inspires all of us at the Fund to carry out our mission of ensuring no member of the RAF Family faces adversity alone.”

“It was an honour to meet some of the beneficiaries who have been supported by the Fund and to hear the impact the Fund has had on their lives.”

Sue Beadel and her husband Chris received the Special Recognition Award for their dedication and commitment to raising vital funds for the charity which supported them when their 25-year-old son, Simon, passed away unexpectedly.

On collecting her award, Sue said: “We are so touched to receive this award; it means so much to us. No one expects to lose a child but when we did, the Fund were there for us. It felt as though they dropped everything to be there for us. So for us we wanted to give something back but you don’t have to have gone through something like this to raise money for charity.”

This is the sixth year that the RAF Benevolent Fund has recognised the outstanding contributions of its supporters, personnel on stations and corporate partners who support the charity each year. The awards ceremony, which was sponsored by Lockheed Martin, was held at Gibson Hall, London.

Last year the RAF Benevolent Fund, the RAF’s leading welfare charity, spent £18.8 supporting the RAF Family, from the youngest child growing up on an RAF station to a wounded veteran ending his career early to a Second World War veteran living out his retirement in dignity.

RAF Benevolent Fund: The Royal Air Force Benevolent Fund is the RAF’s leading welfare charity. We exist to support current and former members of the RAF, their partners and dependants, whenever they need us. In 2017 we spent £18.8m supporting more than 55,000 members of the RAF Family. For more information visit:  www.rafbf.org Twitter: https://twitter.com/RAFBF