A Royal Star & Garter resident has celebrated her 103rd birthday at the charity’s Home in High Wycombe. 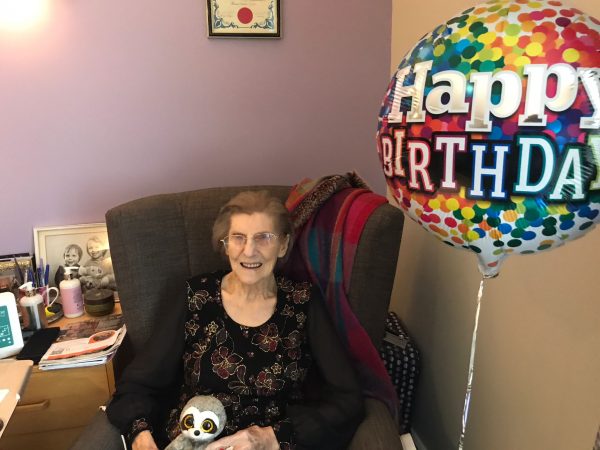 Ena Mitchell was treated to a day of pampering by staff, who styled her hair, gave her a manicure, and massaged her hands, on Thursday 30 September. In the afternoon, she enjoyed a socially distanced party with other residents from the floor she lives on at the Home. The Indian food fan also indulged in a curry lunch, specially cooked up by the Home’s chef.

Ena was the youngest of five children, and born in Kingsley, Hampshire, on 30 September 1918, when WWI was still raging. Royal Star & Garter was established two years earlier to care for the severely injured young men returning from the battlegrounds of the First World War.

She married Bill, a soldier who served in the East Yorkshire Regiment, in 1939. He was one of the 330,000 troops successfully evacuated from Dunkirk in 1940, and four years later took part in the D-Day landings on 6 June, the date of his 33rd birthday. Bill survived the offensive, but later that year, on 13 September, was killed in Belgium when the Bren gun carrier he was travelling in to fetch supplies for his unit was bombed. Ena’s and Bill’s daughter was just two at the time.

Later, Ena started fighting for the rights of the women who had lost husbands during the war, and joined the War Widows’ Association (WWA).

She began raising money for Royal Star & Garter after visiting its iconic former Richmond Hill Home in the 1970s through her work with the WWA. Over the next five decades, she would raise thousands for the charity, often asking for donations to Royal Star & Garter each birthday, instead of presents.

“I’ve had a lovely day. Thank you to all the staff at Royal Star & Garter who organised it and made it so special. I am a lucky lady.”

During Ena’s long life there have been many conflicts that involved veterans and others. As part of its Remembrance campaign, Conflict Never Stops, Royal Star & Garter will be reflecting on their service and sacrifice.