You are here: Home / News / News / How Help for Heroes is uncovering the long-term needs of those wounded in action

Battlefield wounds sustained in a split-second can take years to heal. Many of the Veterans Help for Heroes supports have injuries so severe they would previously have been fatal, and their full impact may take years to understand.

For this reason the charity, alongside the Ministry of Defence (MOD), is funding a ground-breaking study that’s uncovering the ongoing needs of those wounded in action.

The ADVANCE Study is a longitudinal research programme examining the long-term health and welfare of those injured whilst deployed in Iraq or Afghanistan. Expert clinicians are comparing everything from bone density to cholesterol levels and lung capacity to work out what wider impact being wounded might have on a Veteran’s overall health.

Lance Corporal John Herbert is one of more than 1,000 taking part. His life changed forever in 2008 when an Army Land Rover he was patrolling behind in Afghanistan’s Helmand Province was blown up by an Improvised Explosive Device (IED). John suffered a brain haemorrhage, multiple lacerations and was blinded for three weeks.

Eleven years on, John still finds splinters of glass, plastic and metal appearing under his skin. Some of them he is able to prise out, others cause him to cut himself when he shaves. Almost daily, he is reminded of the damage the blast did and he is worried about the long-term effect on his body. Will the shrapnel under his skin poison his blood or tissue, and how will his brain injury affect him in the years to come? 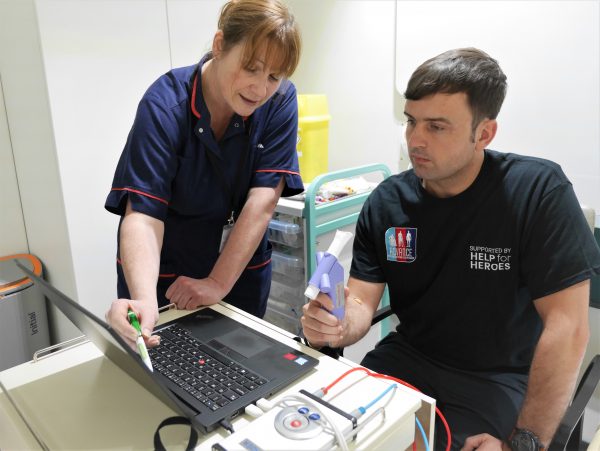 John’s story is sadly not uncommon. During the conflict in Afghanistan alone, 2,188 military personnel were admitted to field hospitals, many with life-changing injuries.

While many of those injured have since undergone extensive rehabilitation, their stories do not end there. Findings from the ADVANCE Study will be important for the care and rehabilitation of future battlefield casualties and will help minimise long-term damage amongst future generations.

Staff Sergeant Craig Davis is also taking part. Craig has never been wounded but is part of a control group which is also crucial to the study; by comparing personnel of the same age, some wounded and some not, the experts can work out what hidden, long-term damage those injured might have sustained. Keen to do something to help those less fortunate than him, Craig gave up some of his leave and flew from his unit in Germany to the UK to help with the study.

“I’m taking part not only to understand what my own body has been through during 17 years of army service, but also to help the team gather knowledge that will hopefully improve (the lives of those injured). I feel privileged to be taking part.” 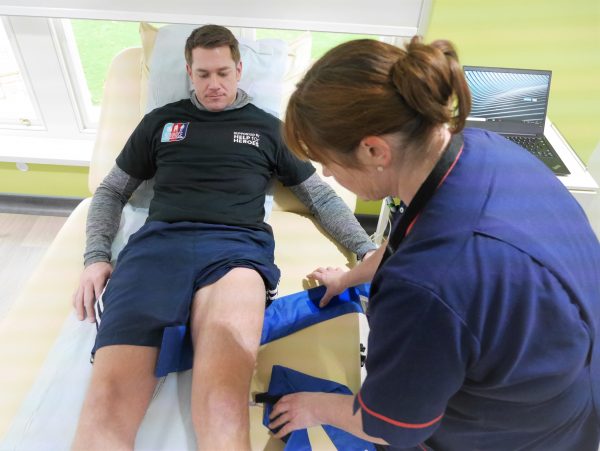 The ADVANCE study’s initial findings are due later this year.

A Better Understanding for Families too

Findings from the ADVANCE Study will not just be important for those who have been injured. When an individual is wounded in action, the lives of their loved ones are also often changed irrevocably. A better understanding of the long-term impact of injury is therefore welcomed by family members.

John’s mother, Lynn Herbert, accompanied her son as he took part in the ADVANCE Study. She explains why she is glad to see research of its kind being carried out.

“When someone is injured, they need support and often it’s not enough just to have the family there, they need that extra help. Sometimes, they won’t even have family around to support them.

“Anything that’s being done to improve care for those injured is very welcome.

“I’m so glad I went along to support John whilst he took part, because it gave me an insight into exactly what’s being done to help an ongoing situation.”

Taking part in the ADVANCE Study

ADVANCE is studying a group of combat casualties and combat Veterans selected by Defence Statistics as fitting the following essential criteria:

If interested in taking part or wondering about eligibility, please email dmrc-advancestudyteam@mod.gov.uk or telephone 01509 251500, ext 3408.