You are here: Home / News / News / HRH The Duke of York, KG Congratulates first ever

HRH The Duke of York, KG Congratulates first ever

Graduates from the Forces Media Academy.

The inaugural intake of service leavers and veterans to graduate from the Forces Media Academy have been congratulated by The Duke of York at a graduation ceremony earlier today.

The Forces Media Academy offers service veterans the opportunity to study for a Higher National Certificate qualification in Creative Media Production, to gain access to an industry where historically people with a military background have been under-represented. 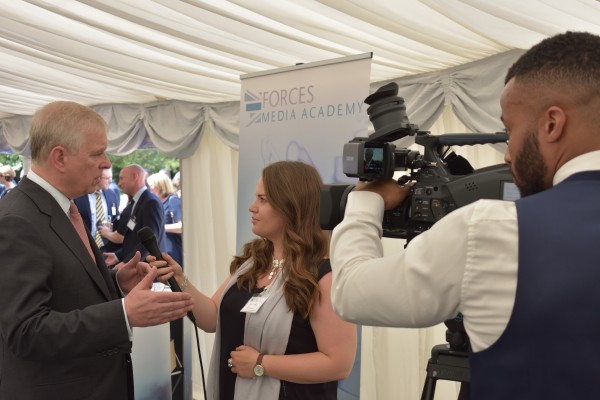 The Services Sound & Vision Corporation (SSVC) – of which HRH has been Patron since 2003 – established the Academy last year at its headquarters in Buckinghamshire, which was opened by The Duke in October 2017.

SSVC also runs the Forces Network, which consists of a number of TV, radio and digital media and broadcasting services, so all of the students had the opportunity to work in a live media environment during the academic year.

Former Royal Marine bandswoman, Poppy Pawsey, is one of the graduates to complete the 10-month Creative Media Production course. Remarkably, she recently picked up a global radio award in New York for co-producing I Am Unconquered, a documentary about Invictus Games athletes which was broadcast on Forces Radio BFBS.

Poppy said: “I have really enjoyed working on radio and film documentaries – telling a story about something I am passionate about and delivering it with emotion and heart is very important to me.

“This course has opened my eyes to another world, it has given me the foundation skills in all aspects of media and I am looking forward to exploring them more.”

The FMA’s principal charity partner, The Royal British Legion, supported all of the students with an £18,000 bursary towards living costs, and the course was also free, thanks to funding from the Chancellor’s LIBOR Fund. Both the bursary and funding have been offered to the next intake of students who will start at the Academy in September this year.

CEO of SSVC, Simon Bucks, said: “These veterans took a completely new direction as they transitioned from service life to study alongside our media professionals here at SSVC. Their successes during this course demonstrate how the skills they have learnt in their military careers can be transferred into very creative fields such as digital, TV and radio production. I wish them all the very best in their new careers.”

For more information about applying for the Forces Media Academy, go online to www.forcesacademy.com. Applications for the 2019/2020 course will open on 1st September 2018 and close on 31st of January 2019.

The Academy was set up in 2017 with a £1.8m grant from the Chancellor’s LIBOR Fund. The Royal British Legion has contributed £800,000 to support the Forces Media Academy which offers veterans a unique opportunity to gain new skills and qualifications in media production after leaving the Services. The contribution from the Legion will cover the living expenses for 15 academy students annually for three years from 2017. Forging new careers and developing different skills after the Armed Forces can be challenging and the Legion is dedicated to supporting veterans’ transition back to civvy street at any point in their lives.

The Forces Media Academy is run by SSVC, the charity which runs the Forces Network and Forces TV. SSVC is a not-for-profit organisation, founded in World War II and specialises in providing media services to the UK Armed Forces.

SSVC remains dedicated to informing, entertaining and connecting the military abroad and at home. SSVC’s mission is to champion the Armed Forces and keep them in the public eye. SSVC makes a vital contribution to Service morale and welfare and specialises in communicating effectively with the wider armed forces audience.

Our services include, but are not limited to:

📢 The Cobseo Female Veteran Cluster with @ARU_VFi would like to announce the virtual launch of our new report, “We… twitter.com/i/web/status/1…