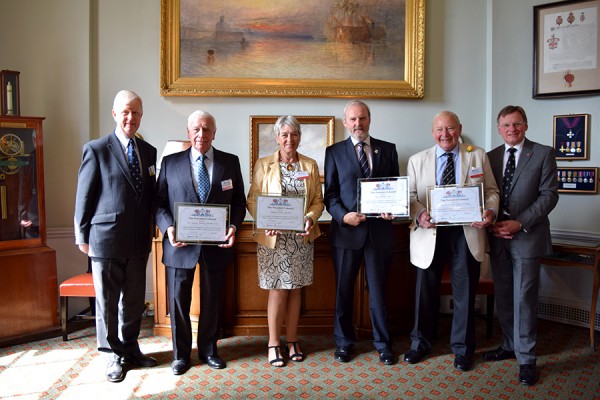 Seafarers UK’s President’s Awards are given annually to individuals or organisations who have made a significant contribution, either through a donation, participation in a challenge event, or championship of the charity’s cause.

This year, Seafarers UK – established in 1917 as King George’s Fund for Sailors – chose to acknowledge those who made a difference through their generous support of the charity’s Centenary Appeal in 2017.

At Seafarers UK’s Annual Meeting on 22 May awards were presented by Captain Ian McNaught, Deputy Master of Trinity House, to individuals and organisations who have made a real difference to the lives of past, present and future seafarers.

Mrs Christine Rankin
A stalwart supporter of Seafarers UK for many years, whose leadership of the charity’s Plymouth Committee, coupled with her long-standing championship of and commitment to the Seafarers Link telephone friendship group, has made a huge difference to individual lives.

Rear Admiral Chris Hockley
Chief Executive Officer of The MacRobert Trust, which has contributed significantly to the promotion of opportunities in marine engineering to young people in Scotland through its support of the Marine Engineering Pathway ‘Pods’ project.

Mr Clive Richards
Representing the Clive and Sylvia Richards Charity, which through its sponsorship of a Marine Engineering Pathway ‘Pod’ has provided an opportunity to introduce students in the South West of England to the potential of a career in marine engineering.

Captain George Swaine
Representing the Laurence Misener Trust, which has sponsored a Marine Engineering Pathway ‘Pod’ for the London area.

Two recipients were unable to receive their awards in person at Trinity House:

Dr Assem Allam
Managing Director of Allam Marine, who has made a commitment to young seafarers and the marine engineers of the future through his support of the Marine Engineering Pathway ‘Pods’ project.

Sir Donald Gosling
Whose generosity through the Gosling Foundation has greatly enhanced the International Port Welfare Programme in support of today’s seafarers.

The Marine Engineering Pathway ‘Pods’ project is in partnership with the Marine Society & Sea Cadets. Each ‘Pod’ is fitted out with marine engines and specialist engineering equipment, with an instructor, visiting schools and Sea Cadets units across the UK.

The International Port Welfare Partnership project involves a grant to the International Seafarers Welfare & Assistance Network in partnership with the Merchant Navy Welfare Board, to encourage the establishment of port welfare boards across the world.