You are here: Home / News / News / HRH The Duchess of Cornwall becomes Patron of BFBS

HRH The Duchess of Cornwall becomes Patron of BFBS

Her Royal Highness The Duchess of Cornwall becomes Patron of BFBS, the military charity and media organisation that entertains, informs, connects and champions the UK armed forces family. 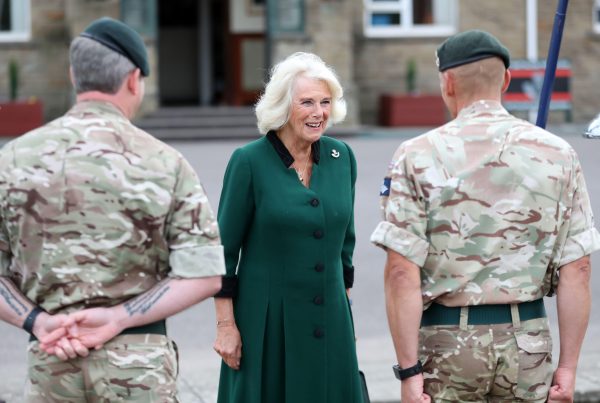 2CFR2YW The Duchess of Cornwall speaking with Riflemen, who are currently undertaking further training, at Beachley Barracks, Chepstow, during her first visit to the 1st Battalion, The Rifles, since becoming their Colonel-in-Chief in July.

The charity’s services are widely considered a “home-from-home” lifeline for members of the armed forces serving their country overseas.

To mark The Duchess of Cornwall’s new Patronage, Her Royal Highness recorded a video message for BFBS to be played out across BFBS’ global TV, radio and digital platforms today (Monday 20 December). In the message Her Royal Highness thanks the armed forces for “…. responding to numerous calls for help both in this country and overseas” and for “the unseen sacrifices that you are making for us all”. In the address, The Duchess also praises BFBS, commenting that “your incredible work raises morale, forges a sense of community and lessens the distance from loved ones”.

The Chairman of the BFBS Board of Trustees Major-General Chris Wilson CB CBE said:

“The Trustees are absolutely delighted that Her Royal Highness The Duchess of Cornwall has accepted their invitation to take on the Patronage of BFBS. We are looking forward to introducing Her Royal Highness to the wide range of welfare and entertainment services we offer the armed forces, their families and veterans – and to our colleagues who are responsible for delivering them.”

“Given the scale of Her Royal Highness’s existing charitable commitments, we see this as welcome recognition at the highest level of the important work we do to support the wellbeing of Her Majesty’s armed forces and their families.”

BFBS has its roots in 1943, during World War II, when its first radio station was opened in Algiers.  It became well known to the general public in the UK through the weekly “Two Way Family Favourites” programme

Today BFBS is a digital-first organisation, using agile and innovative technology to distribute entertainment and information services including TV, audio and digital media to UK forces overseas and at sea.

BFBS operates its own “live and local” radio stations in the UK’s military locations around the world and at home, as well as a Nepali language global network for the Gurkhas and a UK national radio station on DAB+. It also provides new film releases to the armed forces and their families, and stages live entertainment for many military communities.

It employs around 250 people, around a fifth of whom are veterans, reservists or the partners of a serviceman or woman.

About HRH The Duchess of Cornwall

The Duchess of Cornwall regularly undertakes military engagements and in recent months she has visited 4 Rifles, the Poppy Factory and the Field  Remembrance and attended the Rifles Awards Dinner.

Her Royal Highness has a number of appointments within the military including:

The Duchess of Cornwall’s father Major Bruce Shand was commissioned in 1937 in the 12th Royal Lancers and he earned two Military Crosses in the Second World War.  He served in the Army for a decade.