You are here: Home / News / News / Jon is in the running for a marathon fundraising year

Jon is in the running for a marathon fundraising year

A flight sergeant from RAF Cosford swaps his uniform for running kit in his spare time, in the name of charity. 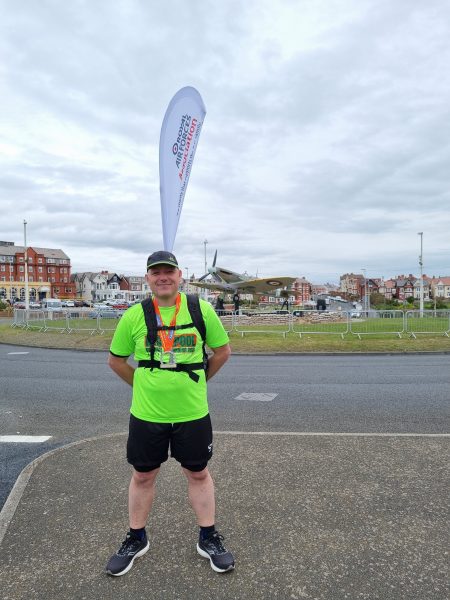 Flight Sergeant Jon Clark, who is part of the Business Development Team at the HQ Defence School of Aeronautical Engineering at RAF Cosford, has set himself a stiff challenge – he is trying to run as many half marathons as he can in 2021 with an RAF Association feather flag fluttering behind him.

“I had originally planned to run one half marathon a month this year, but like so many things at the moment, COVID put a stop to that. I am now trying to run is as many races as I can. I have recently completed the Blackpool Half Marathon and the London Marathon. I’m also looking forward to the Liverpool Rock ‘n’ Roll Marathon on 24 October. This is all about the atmosphere, the people and the live bands that are every mile or so around the course. The free drink and shiny medal help too!

“I’m running for two charities that have helped me in recent years, the RAF Association and the International Bomber Command Centre. I find running to be really helpful for my mental health, especially in these very strange times we’re living through. It helps me to focus on what is really important in life.”

When Jon was to be deployed overseas some years ago, he and his wife noticed that their two young children were becoming nervous about his going away. A colleague mentioned the Association’s Storybook Wings project, so Jon made an appointment and made two Oscar-worthy recordings of his children’s favourite bedtime stories!

“I read both books as I would have done in person, with lots of different voices. The best part was that they didn’t know I’d done it and it was a nice surprise when the disks arrived in the post, addressed to them. While not the same as having me at home, I believe hearing my voice reading to them helped them feel a little more settled at bedtime.”

Jon has some more races lined up in the coming months and early next year. To make a donation visit https://www.justgiving.com/RAFA-Jonclark71