You are here: Home / News / News / KartForce supports PhD study into the positive effects of motorsport on injured veterans 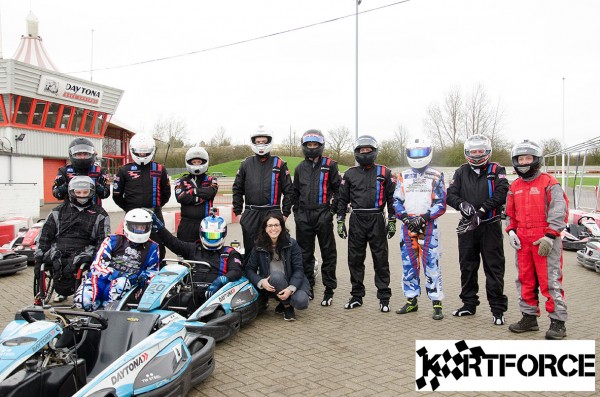 KartForce is assisting with further work to explore how motorsport can help in the rehabilitation of injured veterans.

At a track day in Milton Keynes held on Saturday, the first in a series of interviews to take place over the next 3 years were carried out with the drivers as part of the second phase of a clinical study.

In 2014 Dr Nigel Hunt, an Associated Professor in the School of Medicine at Nottingham University carried out a Clinical Study into the effects of karting on armed forces veterans. He spent time interviewing 15 drivers, including professional racers Damon Hill, Johnny Herbert and Eddie Irvine along with KartForce and Team BRIT drivers.  He concluded that karting had contributed significantly to their recovery.

Dr Hunt found benefits to include the sense of comradeship in karting which is similar to that of the armed forces, the adrenaline buzz, the focus, the competitiveness and the discipline; all qualities that veterans described that an armed forces experience provided; and that they had lost since being injured. Drivers also reported that karting enabled them to compete on equal terms with able bodied racers.

Dr Hunt is now carrying out a further 3-year PhD study into the subject and his student, Danai Serfioti, a PhD researcher in Applied Psychology at The University of Nottingham, spent time with KartForce and Team BRIT drivers at their recent rack day.

The interviews will support her study and she will spend more time with the drivers over the course of the project.

Team Founder Dave Player said: “This work is really important to us as it gives solid support to our core belief that motorsport can be hugely powerful in supporting injured veterans.

“KartForce is the only Forces motorsport organization to have undertaken a clinical study of this nature and we are firm in the belief that work such as this will continue to help gain support and respect for the positive effects motorsport can bring to our veterans.

“It’s such a unique sport that can provide a focus and an adrenaline rush like no other and KartForce looks to show veterans that they can participate, even with disabilities. We look forward to further supporting Nigel and Danai in their studies and to hearing about their findings.”

Drivers from Team BRIT – the car racing division of KartForce – aim to be the first ever all-disabled team to enter Le Mans in 2020.  Their seasons starts in the first race of the Fun Cup Championship on 8th April.