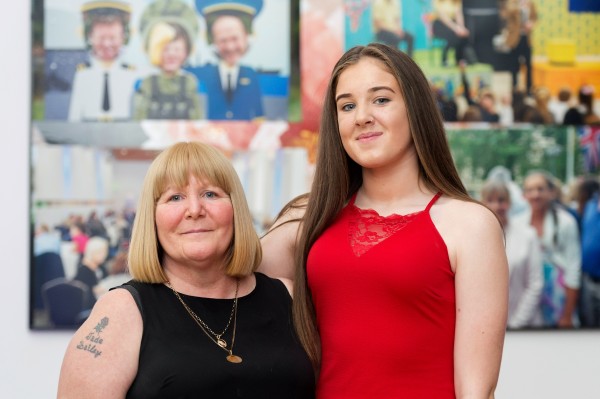 Tuesday 25th April 2017 – Thousands of people will be turning out for the kiltwalk in Glasgow this weekend with more charities from throughout Scotland set to benefit than ever before.

One of those to benefit is the Royal Caledonian Education Trust, which is based in Edinburgh, and provides vital grant funding to children from veteran armed forces families who are struggling to make ends meet, and often living with mental health issues, ill health and disability.

The grants help to cover the cost of school clothing, after-school activities, and school trips. The charity also provides educational resources and training to help teachers and other professionals recognise and support children and young people experiencing difficulties in school – particularly due to frequent mobility and during times when a parent is deployed away from home.

Matthew Middler, fundraising manager for RCET, said: “Having a parent in The Armed Forces can be really tough for some children. Forces kids may go to more than four or five schools due to relocation of a serving parent, sometimes to different countries. Making new friends and keeping on top of school work can be tough. For others it can be hard putting on a brave face whilst worrying about mum or dad on deployment.

“At RCET, we support hundreds of children each year and reach hundreds more through research, training and support materials. If you believe no child should be at a disadvantage because their parent has served our country, then come and take on the Kiltwalk in aid of RCET and help us help them.”

RCET is offering 20 free places for each of the four Kiltwalk events taking place in Glasgow, Aberdeen, Dundee and Edinburgh. To apply for a charity-assured place or for more info email fundraising@rcet.org.uk or phone 0131 240 2224.

Jade Scott from Drumchapel loves dancing and in many ways is like any other teenager, but she has also suffered a double tragedy that no young person should have to experience.

Jade is 13 years old and five years ago she lost her mum.  A year later, her father committed suicide. Jade’s nana, Liz Scott (55), who now has custody of Jade, says her grand-daughter was playing on her bike outside their house in Drumchapel when the Police came to tell Liz that her son Paul – Jade’s father – had killed himself.

“Paul joined the Royal Highland Fusilier’s as soon as he left school” says Liz. “It was one of the best days of my life, I was so proud, we all where.”

Sadly though Paul couldn’t cope with losing his wife, raising a young child and dealing with his own mental health problems. He was medically discharged from the Army but couldn’t adjust to civilian life and started self-harming.

Liz was already suffering from depression when Paul died in 2013 aged 27 years. His suicide was the tipping point for Liz who could barely leave the house and Jade, seeing her nana was struggling, bravely put aside her own grief to support her.

Liz received help from bereavement counselling and a community links practitioner, but then Jade found she too was experiencing difficulty coping. That’s when they turned to the Royal Caledonian Education Trust.

The family has a limited income, as Liz is unable to work due to both her own health issues and a need to care for her young grand-daughter. A modest annual grant from RCET helps pay for school clothing and RCET also fully funds Jade’s dance lessons.

For the first time since her parents’ deaths, the effects of social isolation, poverty and loss that contributed to Jade’s difficult start in life are beginning to fade. Jade is now able to speak with trained professionals about her loss. Her nana believes this is possible because of the confidence and sense of self-worth, which have come from Jade’s dance classes.

Recently, Jade and her follow dancers performed a number of sell out shows at the Mitchell Theatre in Glasgow. Jade has been dancing for 4 years now, and has demonstrated exceptional talent and is often given a lead role in the shows.

Jade and her nana will still have to take it one day at a time, but with help from RCET and other support networks, Jade is starting to feel like a normal 13 year old again. With your support we can help more Armed Forces children like Jade in future years.

The Royal Caledonian Education Trust (RCET) was founded in 1815 to provide education support to the children of serving and veteran Scottish Armed Forces personnel. The charity provides grants assistance where financial difficulties, ill health and disability can hinder a child’s learning and development. We also work in partnership with schools and the wider Armed Forces community to respond effectively to the needs of Armed Forces children in Scotland through a national Education Programme (including undertaking essential research), ensuring equality of opportunity to learn and develop without disadvantage. For more information visit www.rcet.org.uk