We are delighted that LCpl James Symington has won the charity’s competition for composing a new military march, which will be played at future charity events including the Beating Retreat. 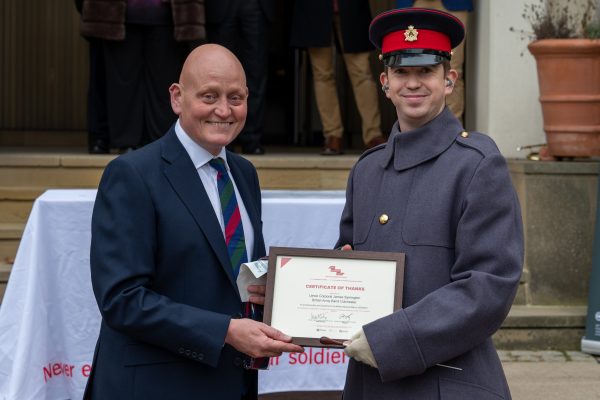 In 2019 ABF The Soldiers’ Charity organised a competition through the Royal Corps of Army Music for a newly composed march that reflected the charity’s work. We received 17 high quality scores and shortlisted three of the best compositions in early 2020. LCpl Symington from the British Army Band Colchester won the competition with a rousing composition entitled “Men at Arms”, which was inspired by the charity’s first advertising campaign in 1944.

Unfortunately, due to the pandemic the award presentation was delayed. However, on 15 November, Major General (Ret’d) Tim Hyams, Chief Executive of ABF The Soldiers’ Charity, presented the winning prize at a ceremony at Wellington Barracks, attended by LCpl Symington’s parents and fiancée who had kept the award ceremony a secret – as had the whole British Army Band Colchester. LCpl Symington – surprised and delighted by the award – also conducted the British Army Band Colchester playing his composition at the ceremony.

Many thanks to LCpl Symington for going to the trouble of composing a truly excellent score, which will be used by the charity at our events for years to come.