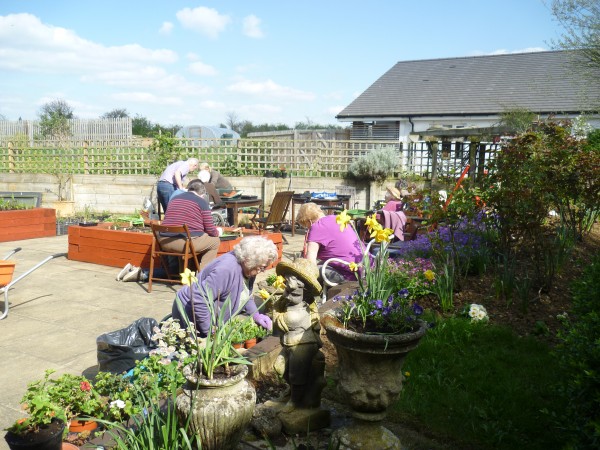 Residents of The Royal British Legion’s six award-winning care homes, four of which include specialist dementia care wings, have taken delivery of new plants and pots donated by Apta and Jersey Plants Direct, for their enjoyment this summer.

The residents have already begun planting and watering the flowers themselves, which will be displayed around the homes and their grounds.

Jo-Anne Wilson, Home Manager of The Royal British Legion’s Galanos House, comments: “Galanos House residents gardening group were thrilled to take delivery of the beautiful planters, pots and plants from Jersey Plants Direct and Apta. Our residents were soon out in the sunshine rearranging the gardens and planting up.”

Graeme Kidson, Product Developer at Apta, said: “I have always been aware of The Royal British Legion and the fantastic work it does around Remembrance. However, it was not until Apta became a corporate partner of the Legion that I truly understood the full extent of the fantastic work the charity does all year round. I look forward to seeing the residents enjoy them.”

Tim Dunningham, Chief Executive Officer of Jersey Plants Direct, adds: “We are delighted to have supplied each of The Royal British Legion’s award-winning care homes with a whole range of plants for their gardens. We know from speaking with our customers how beneficial to people’s health gardening can be for both their physical and mental wellbeing. We hope the residents in each of the homes enjoy the plants we’ve donated and benefit from gardening.”

Apta is a supplier of innovative garden pottery and associated products to independent garden centres throughout the UK and Ireland. 10% of the sales of its poppy range are donated to the Legion.

Jersey Plants Direct is an online plant mail-order company offering a range of bedding plants, shrubs, seeds, bulbs and gardening accessories. 10% of the sale of a selected range of its products are donated to the Legion.