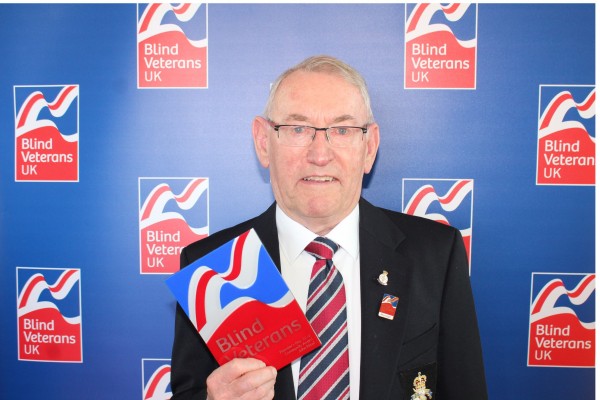 A blind veteran from Llandudno has received a special award from military charity Blind Veterans UK for his outstanding work as a volunteer for the charity over the past year.

John says: “I was overwhelmed when my name was called at the ceremony. I could never give back even half of what I’ve got out of the Blind Veterans UK, so to be recognised for my volunteering is very humbling indeed.”

John was nominated for the award by Mark Hollis, Rehabilitation Support Team Leader at Blind Veterans UK’s Llandudno Centre, for his “infectious enthusiasm and tireless efforts to ensure other blind veterans are enjoying themselves during trips and activities.”

John joined the Royal Electrical and Mechanical Engineers (REME) in 1955 and served until 1958, before joining the Reserves for another five years.

He began to lose his sight around 20 years ago due to glaucoma and optic neuropathy and now has no vision in one eye and around 30 per cent vision in his other eye.

John found out about Blind Veterans UK by chance, when he attended a sailing regatta and one of the prizes was presented by the charity. He began receiving training, equipment and support from Blind Veterans UK in 2015 and joined the charity’s sailing club, through which he has made many friends.

Two years ago John made the decision to start volunteering for Blind Veterans UK at its Llandudno centre. A local to the town, John guides fellow blind veterans around Llandudno on day trips out and has recently qualified as an archery instructor for the charity. He now helps run a weekly archery club for vision-impaired ex-Service men and women like himself.

John says: “The archery club is great fun. I never thought I could be an instructor because I have a vision impairment, but I’ve been given a special monocular which helps me see the target so I can let the archers know how they’re doing. Blind Veterans UK has taught me that sight loss shouldn’t hold you back from doing the things you enjoy.”

“Every year we recognise the achievements of veterans like John who have really demonstrated the values we hold as a charity. John, along with the other nominees and winners are the shining examples of all that can be done to achieve victory over blindness.”