A local volunteer from Hampshire has received an MBE in HM The Queen’s Birthday Honours for her voluntary service to the Armed Forces community. 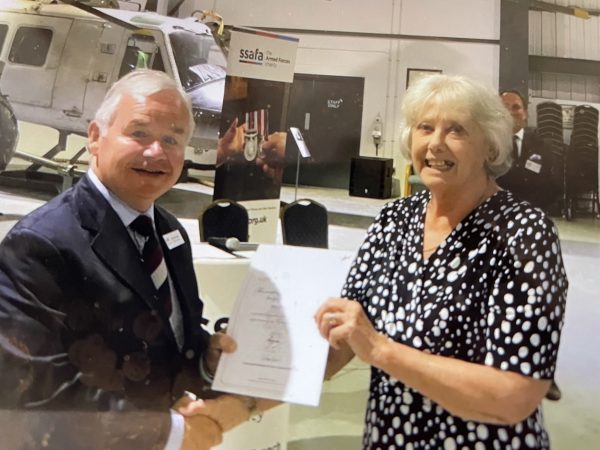 Patricia Lyons has been recognised in HM The Queen’s Birthday Honours for over 24 years’ voluntary service to the Armed Forces community.

Patricia Lyons joined SSAFA Hampshire as a volunteer in 1993 and has been a member for over 24 years. She has been a caseworker, Divisional Secretary, Branch Secretary and, since 2017, an outstanding Branch Chairman, managing one of the charity’s largest branches supporting members of the Armed Forces community.

In 2018, SSAFA Hampshire completed over 1,000 cases and 150 visits to members of the Armed Forces community, raising a total of £717,471.00 to support the needs of beneficiaries in the region. She understands that volunteers are the lifeblood of SSAFA and has made it her mission to ensure that all volunteers are fully supported both physically and mentally.

In addition to her work with SSAFA, Patricia joined the Women’s Institute (WI) in 2005 and became President of her local group in Medstead in May 2019.

Patricia is now the Branch Vice-President for SSAFA Hampshire.

“On behalf of all at SSAFA, I would like to congratulate Patricia on being awarded an MBE. Her tireless work and contribution to SSAFA over the past 24 years is greatly appreciated and we are grateful for her continued service.”

“Without the invaluable efforts of our supporters, SSAFA would not be able to provide the level of support that it does to those serving members of the Armed Forces, veterans and their families.”

“We are absolutely delighted that Patricia’s hard work has been recognised by Her Majesty The Queen who we are extremely proud to have as the Patron of SSAFA, the Armed Forces charity, on Her Birthday Honours list.”