Sebastian Philp, a London cabbie from Shoreditch, has a real passion to learn all he can about WWII. This summer he decided to find out more about the Italian Campaign and took a trip to discover more about where his Grandfather, had fought and to find the locations that the veterans he meets through the Taxi Charity talk about. 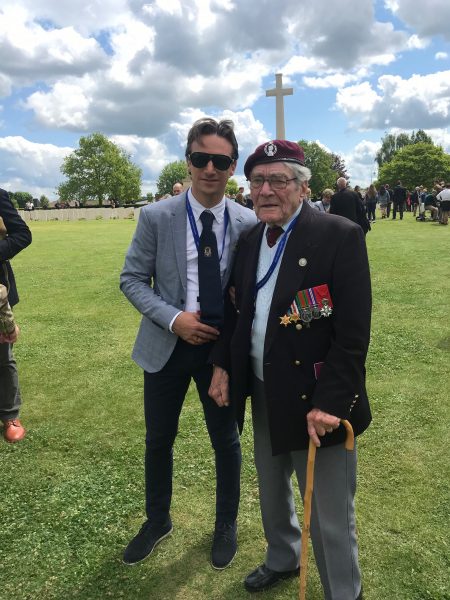 Sebastian (Seb) Philp, 40, is a volunteer for the Taxi Charity for Military Veteran and said,

“I have learnt so much about WWII from the veterans I meet through the charity and know so much about what happened  in France and the Netherlands from the trips we take the veterans on each year but I knew very little about the campaign in Italy. So this summer I decided that it was time I found out more about my own family’s history and I took a trip to Italy to discover more about the Italian campaign where my Grandfather, Henry “Harry” Philp had done his bit for the war effort.”

“I knew very little about my Grandfather’s part in the war, as he never really talked about it other than to tell us he was a transporter and that he had a rough time and had seen a young kid pick up a grenade and get blown apart in front of him. I do remember vividly that when I was young and on holiday in the French Alps that my Grandfather told me that he had come down the alps on a donkey during the war, so the French Alps had to play their part in the journey.”

Seb’s Italian tour began in Monte Cassino where the battle for Cassino, resulted in 55,000 Allied casualties. In Anzio he visited the two landing beaches, Peter and Xray, Peter where the British Landed and Xray where the Americans landed. The British and Americans stayed here for two months allowing the Germans to move down the country towards the allied troops and giving them a huge advantage.

“One veteran I have met through the Taxi Charity is John King. John was on HMS Janus, a J class destroyer, near Anzio.

On 23 January 1944, Janus was torpedoed  and sank off the Anzio beachhead in western Italy   It took a mere twenty minutes for Janus to sink with the loss of over 200 lives, John was one of the just 62 who survived.”

“The main invasion force landed around Salerno, on the western coast, on 9 September 1943 in Operation Avalanche. Operation Avalanche was the codename for the allied landings near the port of Salerno executed on 9 September 1943, part of the allied invasion of Italy. There were 3 landing zones one was Paestum where the brother of Bill Gladden, another of the veterans, that I have met through the Taxi Charity landed.”

After his day in Salerno Seb got the night ferry from Naples to Sicily where he learnt more about Operation Huskey.  Operation Husky, was a major campaign in which the allies took the island of Sicily from Italy and Germany. It began with a large amphibious and airborne operation, followed by a six-week land campaign.

“The battle in Sicily was one of the first operations involving the Paras and I am fortunate to know 100-year-old WWII veteran, Raymond Whitwell, who was part of this operation. Ray was in the first wave of troops to land in a Waco glider at a bridge near to a town called Siracusa, where their job was to secure the bridge for the troops coming in from the sea.”

“My tour was steeped in history and I loved every minute. My next will be to Crete to learn more about the part this Greek Island played in WWII.”