You are here: Home / News / News / Longest serving blind veteran’s remarkable life celebrated at charity chapel as he passes away at 98 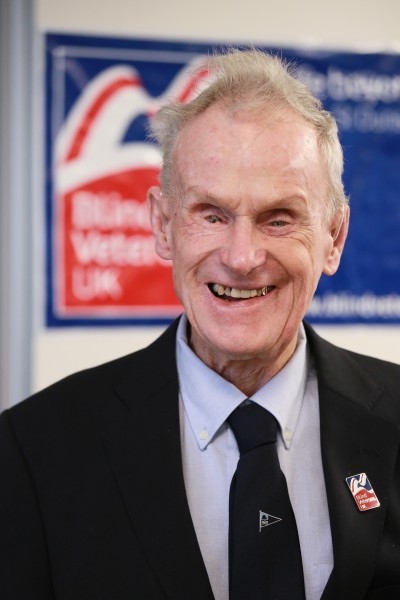 The long life of a remarkable blind veteran was celebrated on Tuesday at a funeral service held at the St Dunstan’s Chapel at the Blind Veterans UK training and rehabilitation centre in Ovingdean.

Norman Perry, who lived at the Blind Veterans UK centre for more than 18 years, was the longest serving beneficiary of the charity having received support for over 76 years.

Norman, who died on 16 April aged 98, insisted that guests were not to wear to wear black to his funeral. The service, which was attended by friends, family and other blind veterans, was much more a celebration of life than a sombre affair.

Norman was only 18 years old when he became gun sergeant, with his own gun and gun crew. He was two years too young to go overseas and was posted to Borden as a drill instructor.

Speaking of his time in service Norman said: “That wasn’t my idea of a war. I had a word with my RSM who told me to put in for a transfer back. I did, and three months later I was in France with my old regiment.”

Norman fought in Lilles and Ypres before landing in Newport in Belgium. In 1941 he was shipped out to the Middle East, beginning a period of fighting all over the world. He fought battles in Iraq, Suez, Egypt, Libya and the Western Deserts.

It was during one of these battles, in the Sahara, that Norman lost his sight, when the Germans attacked with trench mortars. He remembered:

“I was directing a gun teller, when I got one piece of metal in each eye at the same time. That spun me round, and something big hit me in the back. When I dropped, I got some more bits and pieces in the right thigh. I heard a sergeant saying: ‘He’s had it’, and in the best Army language I could muster, I told him I hadn’t.”

After initial training at the Blind Veterans UK (then known as St Dunstan’s) centre in Cape Town, he returned to England in 1943 to finish his training at St Dunstan’s wartime centre, Church Stretton. From there, he moved to the RNIB physiotherapy school in London.

Norman also had a rich history with several sports teams at Blind Veterans UK, going to West Berlin in 1974 and 1978 to participate in international skiing, and implementing countless archery events. He also won the archery for the blind contest at the British Sports Association for the Disabled National Games at Stoke Mandeville in 1976. At the age of 93 he was the oldest competing archer, sighted or vision-impaired, in the country.

Last year, a new barn was built on the Blind Veterans UK grounds in Ovingdean which will be used by the charity’s archery club. On its opening it was officially named the Norman Perry Barn.

Chief Executive of Blind Veterans UK, Major General (Rtd) Nick Caplin CB, who attended the funeral, said: “Norman lived a remarkable life and I know the impact that his achievements had on so many other blind veterans.

“Knowing that Norman had done all these things was, and continues to be, an inspiration to them.

“He will be sorely missed by everyone at Blind Veterans UK but he will never be forgotten. We look forward to seeing archery at the Norman Perry Barn for decades to come.”