An Air Force veteran’s childhood memories have featured in an exhibition in Woking. 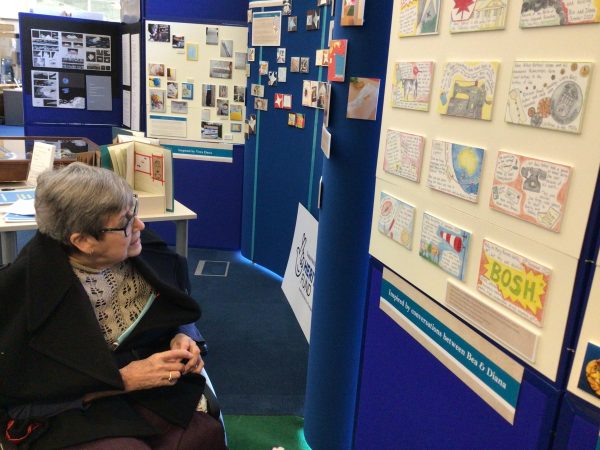 Bea Jones’s recollections of growing up during WWII, and later living on a farm, were captured in the Lost Letters project, on display at Surrey History Centre.

The Royal Star & Garter resident visited the exhibition on Tuesday, 8 March, where she was given a special gift from event organisers.

The Lost Letters project used archived letters to engage with residents at Royal Star & Garter, a charity which provides loving, compassionate care to veterans and their partners living with disability or dementia. The thoughts and memories triggered by the letters were written down on postcards, with a selection decorated by artists and put on display at the exhibition.

Women’s Auxiliary Air Force (WAAF) veteran Bea was read old letters by charity volunteer Diana. One sparked wartime memories when she was a child, while another letter about farmyard animals led Bea to recall her time owning a farm with her husband.

During a visit with Royal Star & Garter staff to the exhibition, Bea saw her display of 12 postcards, and was presented them in a special album.

“I liked reminiscing about my life on a farm, and it was nice to talk about it. Taking part in this project also helped me deal with the claustrophobia of Covid and meant the four walls of my room opened up and fell away.”

Royal Star & Garter’s Wellness Coordinator Sarah Nunn took Bea to the exhibition. She said: “Bea was thrilled to see the display. Our residents have led extraordinary lives and it’s a privilege to hear their stories. These trips down memory lane make us feel more connected and confident, maintain communication skills, eliminate boredom and reduce symptoms of depression. So they play an important part in supporting residents’ wellbeing.”

Lost Letters’ is a National Lottery Heritage Fund project run in partnership between Surrey Heritage and It’s Not Your Birthday But…, a not-for-profit organisation that seeks to combat social isolation by bringing people together through artist-led workshops and programmes using letters, writing, heritage and visual arts.

Alexandra Buhler is the artist from It’s Not Your Birthday But… who brought Bea’s memories to life on the postcards. She had been meeting with Bea via Zoom during her Lost Letters discussion, and was at Surrey History Centre to welcome Bea, presenting her with the photo album. Alexandra later said:

Royal Star & Garter has Homes in Solihull, Surbiton and Hugh Wycombe, and is welcoming new residents. For more information on this, and to work for the charity, please go to www.starandgarter.org