You are here: Home / News / News / ‘We would be lost without the help of the RAF Benevolent Fund’ 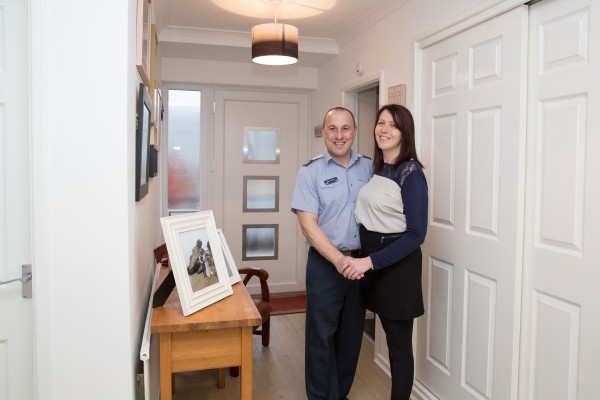 Sgt Steve Lawrence and his wife Laura were given support from the RAF Benevolent Fund in the form of covering costs of building work to future proof their home for Laura’s needs.

For Sgt Steve Lawrence joining the RAF had been a long held ambition – he’d been dreaming of a career as an Air Force engineer since the age of 14!

Now, aged 42, as he approaches his 23rd year in service, his dedication to his duty has been repaid by the RAF Benevolent Fund, repaying the debt we all owe to those who serve their country.

My wife Laura and I met when we were skydiving, it was love at first dive, you could say. That was before, before her condition meant she could barely walk unaided, let alone throw herself out of an aeroplane.

Laura and I met in 2012, I proposed two years later on the Greek island of Skiathos and the following year we returned to marry in an intimate ceremony on the beach.

Laura is 36, and life is far from easy for her as she suffers from primary progressive multiple sclerosis. It means each time she has a flare up and her condition deteriorates she has to adjust to a new ‘normal’. Laura’s condition means she finds walking any long distances difficult and cold eventually need to use a wheelchair permanently.

We first received support from the RAF Benevolent Fund when she had to have three separate brain surgeries. I was faced with the reality of a big financial bill while I stayed close by to support her. Money is one of the biggest worries I have, benefits do not go that far so financially we have to be careful. The Fund were able to give me a grant to cover the costs of my accommodation and travel to visit Laura..

But that wasn’t the end, once the RAF Benevolent Fund know you’re a family which needs support they are there to step in, whenever you need them. When Laura and I were forced to buy our next house without stairs, they were on hand to make it as accessible as they could for both of us.

It sounds like a cliché but a huge weight was lifted off my shoulders. We would be absolutely lost without the help they have given us. The adaptations to the house have given Laura more freedom and allowed her to relax. Not only that, the works have also given her peace of mind that I am not worrying about her, I can concentrate on my job here, at RAF Coningsby.