You are here: Home / News / News / Massed Bands of Her Majesty’s Royal Marines to perform at Bournemouth Pavilion Theatre on May Bank Holiday 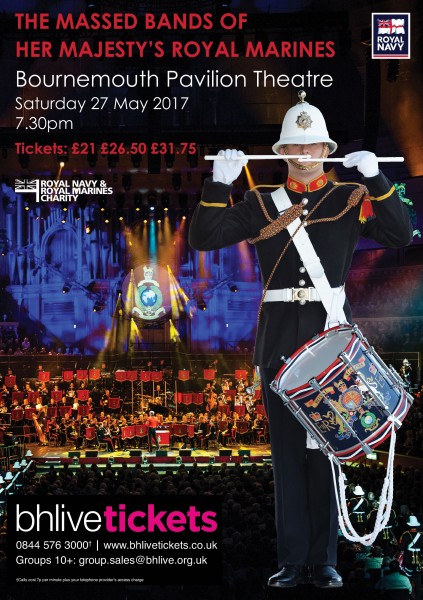 The Massed Bands of Her Majesty’s Royal Marines will bring a dazzling show to Bournemouth Pavilion Theatre on Saturday 27 May, fresh off-the-back of their world-famous Mountbatten Festival of Music performance at the Royal Albert Hall.

Backed by spectacular lighting and big screen imagery, the Royal Marines will demonstrate their outstanding virtuosity and versatility when they perform at the elegant seafront theatre over the Spring Bank Holiday weekend.

Highlights at the concert include a performance by the internationally-renowned Royal Marines Corps of Drums, known for their precision drill and breath-taking Drum Displays.  Along with music from the stage and screen, superb solo items and the traditional marches and overtures from the military band catalogue there really is something for everyone in this not to be missed event.

All proceeds from the concert will go to The Royal Navy and Royal Marines Charity, the national charity of the Naval Service, which celebrates its 10th anniversary this year and whose aim is to support sailors, marines, and their families, for life.

Lieutenant Colonel Nick Grace OBE, Principal Director of Music Royal Marines, comments: “The people of Bournemouth have a close relationship with the Naval Service, with a number of key naval assets and Royal Marines personnel making annual appearances at the ever-popular Air Festival, so the venue is more than fitting for our outstanding musicians to demonstrate their skills.

“The programme of music is based on our very successful Mountbatten Festival of Music and we were delighted to play to near capacity audiences over three nights at London’s Royal Albert Hall in March this year. I know that everyone who attends the concert in Bournemouths Pavilion Theatre is in for a very special evening.” 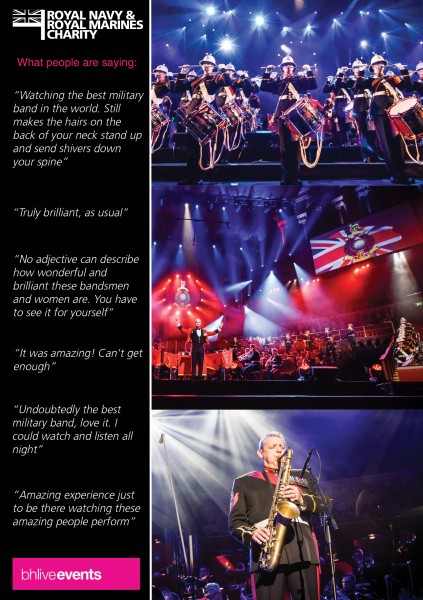 The Pavilion Theatre and Ballroom is Bournemouth’s traditional venue for year round entertainment. Built in the 1920s, it retains its splendour and elegant styling and is Bournemouth’s regular home for West End stage shows, Opera, Ballet, Pantomime and Comedy as well as for corporate presentations and dinner dances, product launches and small conferences.

In particular the Ballroom enables you to hold gala dinners, fashion shows or other activities to complement a conference or exhibition in the BIC.

Refurbished in 2007, the Pavilion Theatre holds a seated audience of 1012 in fixed seats on a raked floor, with a further 446 in the circle. The Ballroom provides an exquisite backdrop for banquets, receptions, social functions and even small fayres and exhibitions.