You are here: Home / News / News / Merchant Navy Day on 3 September Will See Red Ensigns Flown Across the UK

Seafarers UK is calling on flagpole owners throughout the UK to support the charity’s annual ‘Fly the Red Ensign for Merchant Navy Day’ campaign. 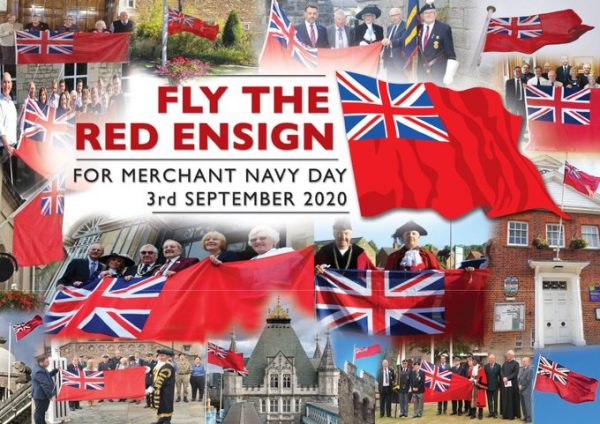 Last year the UK Merchant Navy’s official flag was flown at more than one thousand locations ashore, including by Prime Minister Boris Johnson at No. 10 Downing Street.

With few public flag-hoisting ceremonies being organised this year due to the COVID-19 pandemic, Seafarers UK is asking local authorities, councils, businesses and organisations with flagpoles at their premises to fly a Red Ensign on 3 September.

The symbolic act of flying a Red Ensign ashore provides a timely opportunity to raise public awareness of the UK’s ongoing dependence on all merchant seafarers.

Despite the wide-ranging impacts of the coronavirus, seafarers of many nationalities have been working hard to keep the UK supplied with food, fuel, medicines and other essential goods. But despite being recognised by some governments as ‘keyworkers’, most seafarers are still being prevented from disembarking in many ports on global trade routes.

Hundreds of thousands have been compelled to continue working after their contracts end, as replacement crews are unable to leave their home countries to start work on ships in ports around the world. The impacts on ‘stranded’ seafarers are inevitable; ill health, anxiety, poverty, etc.

Seafarers UK has released £2 million for grants to ‘frontline’ charities that are supporting seafarers in need and their families.

All participants who register online will be added to the charity’s ‘Roll of Honour’ and sent a ‘Commemorative Certificate’ for public display.