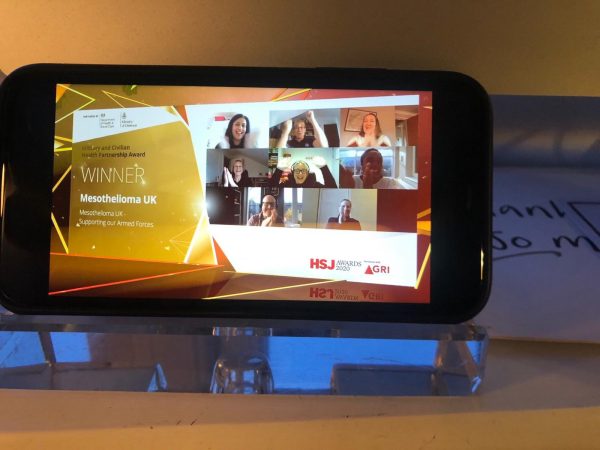 Following an intensive judging process, Mesothelioma UK was handed the prestigious accolade ahead of a highly competitive shortlist. Over 4,500 health and social care staff ‘tuned in’ to the first virtual HSJ Awards evening on 17 March 2021 to celebrate the dedication, innovation, and teamwork within the health care community. 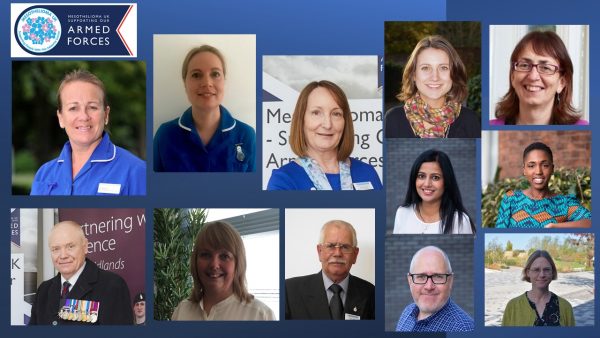 Hosted by comedian, actor and charity campaigner, Sir Lenny Henry, alongside award-winning journalist and broadcaster, Victoria Derbyshire, the awards ceremony celebrated the diligent and selfless work of our healthcare heroes over the past 12 months – a year which has been one of the most demanding on record for the NHS.

Mesothelioma UK was recognised for its ambition and demonstrable positive impact that its project has had on patient and staff experiences within the health and/or social care sector.

The judges said of the Mesothelioma UK Supporting our Armed Forces campaign:

‘We felt this was an all-round package of care based on a well-researched evidence base which has also influenced government policy in the sector. They clearly identified the distinct issues related to military service which impacts upon their clients and have developed strategies to address these distinct challenges. The team have taken the clinical and welfare elements of their existing service and adapted these to meet the needs of the military community. The judges want to congratulate an enthusiastic and dedicated team who show ambition, drive and the expertise to achieve even greater things. This was an outstanding project with far reaching impact.’

The project has reached out to the armed forces community in a number of ways, through awareness raising leaflets, events, and a dedicated Facebook group for patients and carers affected by mesothelioma. Also, a specialist Armed Forces mesothelioma nurse has been appointed, based in Southampton, who understands the needs of Armed Forces personnel and a finance and benefits advisor who can deal specifically with Armed Forces personnel and veterans. In addition, the project is planning a permanent memorial at the National Memorial Arboretum to honour those who have served in the Armed Forces and lost their battle against mesothelioma.

“This is a major recognition of the outstanding work of our nurses, operations team, ambassadors and supporters nationwide. I want to thank all of the people who help Mesothelioma UK to support patients across the country. We’re delighted to have been recognised ahead of other organisations and projects who are providing exception healthcare services to our veterans.

“The UK has the highest incidence of mesothelioma in the world; this disease shouldn’t happen to anyone, least of all people working in public service such as our Armed Forces. We owe it to them to address the UK’s asbestos legacy, to prevent exposure and raise awareness about the dangers of asbestos. For those already living and dying because of their exposure we have to ensure our wonderful NHS is at its fighting best.

“This project was all about doing just that, making sure that our veterans get the very best care possible, connecting services and organisations to achieve that and shining a light on the impact the UK’s asbestos public health disaster is having on our armed forces. It has been an honour and privilege and we sincerely hope, working with our Armed Forces and the NHS, that we can go from strength to strength.”

“Following what was undoubtedly the most challenging year for the NHS, it was impressive to see the commitment to excellence shown by the finalists.

The high quality of entrants in 2020 posed a real challenge to our expert judging panel, who were impressed by the breadth of applications demonstrating real evidence of improvements to patient care.

“We know that Mesothelioma UK is not alone in fostering a culture of excellence and hope that this award win will be a source of inspiration for like-minded teams across the country. We are delighted that the HSJ Awards continue to be considered the gold standard awards programme in healthcare. Congratulations again to Mesothelioma UK and welcome to the HSJ Awards Alumni!”

The full list of winners for the 40th HSJ Awards (partnered by GRI) can be found at https://awards.hsj.co.uk/winners-2020.